ADA Has A Long Way To Go, Even 25 Years Later 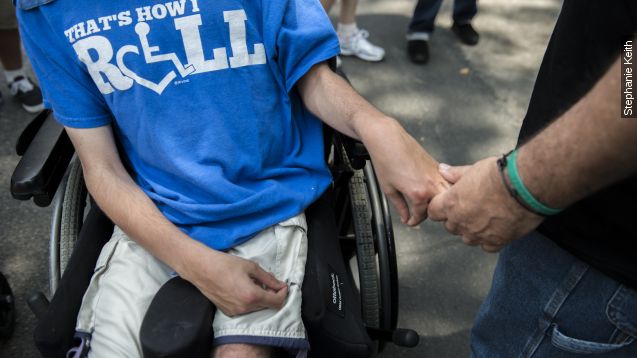 SMS
ADA Has A Long Way To Go, Even 25 Years Later
By Heather Adams
By Heather Adams
July 25, 2015
Twenty five years after the Americans with Disabilities Act was signed, there's a long way to go before people with disabilities are on equal ground.
SHOW TRANSCRIPT

Twenty five years ago, President George H.W. Bush signed the Americans with Disabilities Act or ADA. It added ramps to buildings, braille on elevators, banned employers from firing people because of a disability and more. (Video via C-Span)

At the time, that was a huge step forward, but progress since then hasn't always been consistent. (Video via YouTube / MNDisabilityCouncil's Channel)

When Bush signed that bill, household income for those with a work limitation averaged just over $36,000 a year, and the employment rate was at 28.4 percent. Since then, these numbers have actually dropped, with the employment rate cut virtually in half by 2013.

And the average day isn't getting any easier. For example, buildings aren't always designed with disabilities in mind. People with disabilities say services are in weird locations or in buildings that are grandfathered in and provide no ADA-related assistance. (Video via YouTube / Zebra Chronicles)

And finding good housing is tough, too. For those who are deaf, communication with landlords and roommates can be difficult. And to stay safe, some tenants have to install their own light-based fire alarm systems. (Videos via Disability Independence Group, Inc. and WOWT)

The 1990 act made public buses a lot more functional, but other modes of transportation aren't as friendly. NPR found only 21 percent of subway stations in New York are accessible, the worst percentage of any system in the country. (Video via DNAinfo New York)

Amtrak has almost 400 stations that aren't up to ADA standards. The rail service put out a press release just last week highlighting past progress and projects Amtrak says will be finished by the end of the year. (Video via YouTube / Veronica Morris)

Carnival Corp., a company with disability-related lawsuits dating back more than a decade, just reached a settlement with the Justice Department to increase accessibility on its cruise ships. Carnival also has to pay $350,000 to past customers who complained about access. (Video via Carnival Cruise Line)

Technology hasn't kept up, either. Many websites still don't provide features that allow easy access for people who are blind. Some even argue that because the law was written before these technologies, it doesn't apply. (Video via Microsoft in Education)

And besides the physical difficulties of day-to-day life for people with disabilities, experts say the next step is normalizing disabilities and creating new opportunities for everyone. But as we've seen, that won't be easy. (Video via YouTube / devinsupertramp)