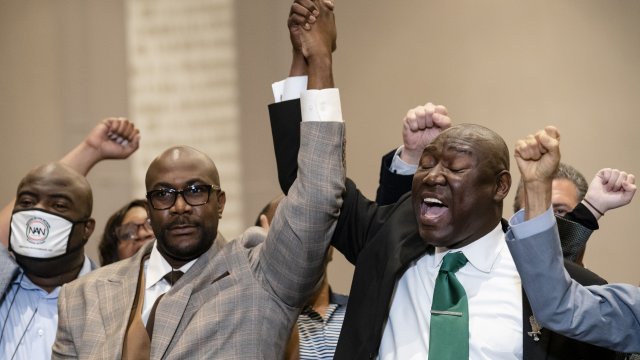 The lawyer for the Floyd family — celebrating the victory with them yesterday.

And again — while there was this feeling of relief — he stressed this is just the beginning.

Ben Crump is also representing the family of Daunte Wright — a 20-year-old Black man who was shot and killed by a police officer just miles away in Brooklyn Center last week.

In a phone call with President Biden, Crump called for more action.

"Hopefully this is the momentum for the George Floyd Justice in Policing Act, to get passed and have you sign!" said Crump.

President Biden responded, "You got it pal. That and a lot more. Not just that, but a lot more."

That act aims to combat police misconduct and racial bias in policing.

And it's one the president supports.

He addressed the country after the verdict.

"We can’t leave this moment or look away, thinking our work is done. We have to look at it as we did for those 9 minutes and 29 seconds," the president said. "We have to listen.  'I can’t breathe.  I can’t breathe.' Those were George Floyd’s last words.  We can’t let those words die with him."