Minneapolis Activists Say Trial Is About More Than Floyd's Death 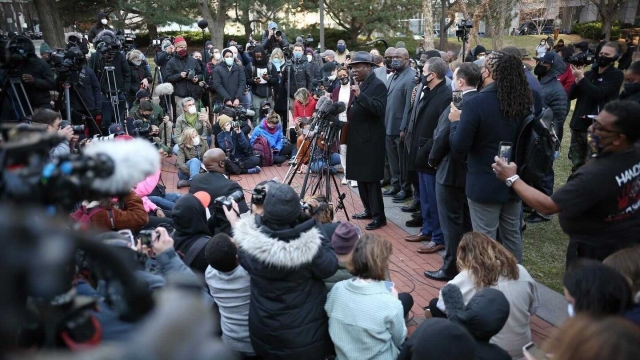 The Derek Chauvin murder trial is about much more than whether he's guilty.

"If you look at the 24 demands of justice there's only one that has anything to do with the verdict for Derek Chauvin and the other three officers that killed George Floyd," Marcia Howard, a Minneapolis activist, said.

Marcia Howard has been meeting at the corner of 38th and Chicago on Minneapolis' south side since George Floyd died. She's helped turn this corner where Floyd was killed into a memorial and a protest space. It's a symbol of a broader national conversation.

The demands from Howard and local activists include investment in the area where George Floyd was killed, an end to qualified immunity which gives cops broad protections from civil lawsuits and the resignation of Hennepin County Attorney General Mike Freeman.

"They're here because they live here and they want justice. We're all within sight of this intersection. George Floyd wasn't the first brother I've seen killed right here, not even at the hands of police," Howard said.

"Chauvin is in the courtroom but America's on trial," the Rev. Al Sharpton said.

George Floyd's brother addressed the community, but effectively the nation, too — just hours before the prosecution's opening statement.

The Minneapolis Police department and surrounding law enforcement has been wrapped in controversy before, first with the death of Philando Castile and later Jamar Clark.

The officers in both cases were not convicted. Chauvin's attorneys argue Floyd's death was due to his poor health and drug abuse.

"To be honest we don't have a lot of faith that this is going to wind up being a guilty murder charge. We don't. Therefore the demands have to do with redressing historical injustices like the lack of mental health services, the lack of jobs in this neighborhood, the fact that we've always been over-promised and under-delivered, over-policed and over-criminalized. That's what the 24 demands are addressing," Howard said.