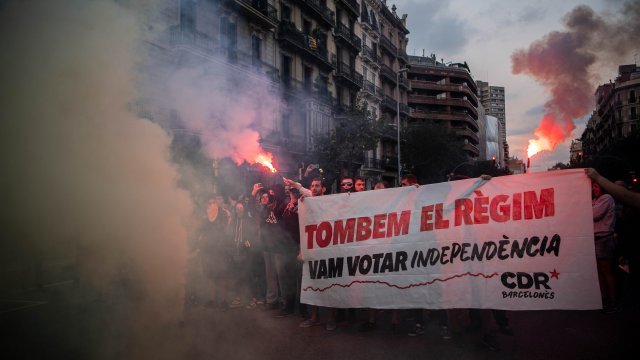 Catalan separatist activists gathered in parts of Spain on Monday to mark the anniversary of the region's vote for independence.

Tens of thousands of students protested in Barcelona ahead of a larger planned rally later in the day. Demonstrators waved Catalan flags, set off smoke bombs and fireworks and blocked roads and railways.

Monday's rallies follow separate clashes between police and protesters on Saturday. Those left dozens of demonstrators injured and six in police custody.

Catalonia's President Quim Torra addressed protesters on Monday, telling them to continue putting pressure on the Spanish government. Back in September, Torra relaunched his campaign to secede Catalonia from Spain.

Catalonia has been trying to split from Spain for years. Last year, a former Catalan leader organized the independence referendum. But Spain deemed the referendum illegal, dissolved Catalonia's parliament and took direct control of the region.

Spanish President Pedro Sánchez considered giving Catalonia more autonomy through another referendum, but he made it absolutely clear the vote would be for more autonomy, not independence.