Activist DeRay Mckesson Is With Her — But Not On Everything 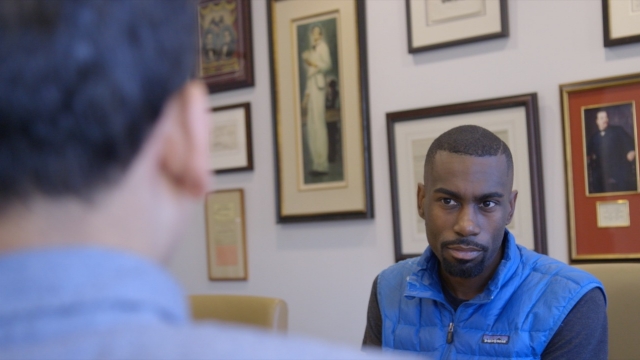 SMS
Activist DeRay Mckesson Is With Her — But Not On Everything
By Jamal Andress
By Jamal Andress
November 2, 2016
Although he said he'll vote for Hillary Clinton on Nov. 8, Mckesson told Newsy he still has concerns about the Democratic nominee.
SHOW TRANSCRIPT

"This is not just a vote against Trump, like he should not be president, but this is a vote for her," DeRay Mckesson said.

DeRay Mckesson, one of the most recognizable faces of the Black Lives Matter movement, finally announced he's voting for Hillary Clinton after months of silence and multiple meetings with the Democratic nominee.

"I think a lot of people have real questions about her sincerity, and I think one of the things that was important to me was to make sure she understood the platform she put out, or if it was just words on a website. And I think she does understand it. Is it perfect? No. Do I agree with her on everything? No," Mckesson said.

One of the things Mckesson doesn't agree with is her stance on the death penalty — a political issue that he specifically mentioned as a problem.

"What we know to be true is the death penalty is enacted in ways that disproportionately affects disadvantaged people of color. ... It is unfortunate that she is committed to the death penalty as a tool and tactic. ... And she really needs to change her position on it," Mckesson said.

Clinton's involvement with passing her husband's 1994 crime bill is also a controversial point for Mckesson.

"They are often the kinds of kids that are called superpredators," Hillary Clinton said in 1996.

"The reality is, it's done. It happened, and it's still ruining people's lives every day at scale. So it's like, what's your plan to undo it? And she does have a plan to undo it. ... It is a beginning, and hopefully in the first 100 days, she puts out a crime bill that's actually something we can fight for," Mckesson said.

And Mckesson says that fighting won't stop if Clinton makes it to the White House.

"If we turn out in record numbers, I think that systems and structures have to change. You think about two years ago — nobody thought Hillary Clinton would have a racial justice part of her platform, and she does. And that's definitely a result of the activism of the last two years, and people pushing and pressing," Mckesson said.