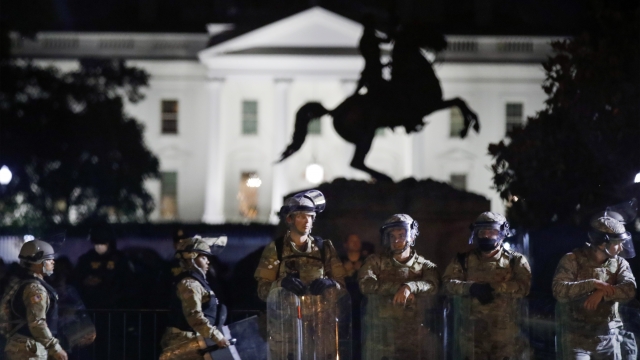 The Department of Defense has sent approximately 1,600 active-duty U.S. troops to the Washington, D.C. area as the Trump administration considers deploying them onto the streets to respond to protesters.

Those troops came from Fort Drum in New York and Fort Bragg in North Carolina. A Pentagon spokesperson said they're currently "not participating in defense support to civil authority operations," but are being kept on "heightened alert status" at nearly military bases.

The deployment comes as President Donald Trump seeks to quell protests that are in response to the death of George Floyd and police brutality. Some of those protests have led to violence and property destruction.

"If a city or state refuses to take the actions that are necessary to defend the life and property of their residents, then I will deploy the United States military and quickly solve the problem for them," President Trump said during a press conference Monday.

The Insurrection Act was most recently invoked during the 1992 Los Angeles riots and during Hurricane Hugo in 1989. It allows a president to deploy the military on U.S. soil to suppress civil disorder.

Defense Secretary Mark Esper told reporters Wednesday that he does not support invoking the Insurrection Act.

"The option to use active duty forces in a law enforcement role should only be used as a matter of last resort."

The National Guard has activated thousands of members to help law enforcement respond to protests in Washington, D.C. And even more are on their way, according to a U.S. defense official.