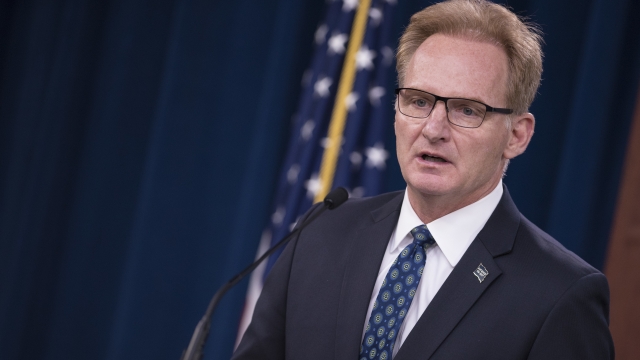 SMS
Acting Navy Secretary Sorry For Calling Ex-Commander 'Stupid, Naive'
By Briana Koeneman
By Briana Koeneman
April 7, 2020
Thomas Modly blasted Brett Crozier in a surprise speech to soldiers on board the aircraft carrier. But he walked back the remarks later in the day.
SHOW TRANSCRIPT

"If he didn't think that information wasn't going to get out to the public, in this information age that we live in, then he was A, too naive or too stupid to be the commanding officer of a ship like this. The alternative is that he did this on purpose," Modly said.

Acting Secretary of the Navy Thomas Modly has apologized for comments he made to the USS Theodore Roosevelt's crew about their former commander, Brett Crozier.

On Monday, Modly blasted Crozier in a surprise speech to sailors on board the aircraft carrier. But he walked back the tone of those remarks later in the day, saying: "I do not think Captain Brett Crozier is naive nor stupid. I think, and always believed him to be the opposite. ... I apologize for any confusion this choice of words may have caused."

Crozier was relieved from command after raising concerns about COVID-19 spreading on his ship. He wrote a letter to Navy leaders suggesting some 50 sailors could die from the coronavirus.

Modly had said earlier that Crozier showed "extremely poor judgment" by sending the letter to dozens of people over an unclassified channel and making the vessel potentially vulnerable.  In his apology, Modly said because the captain is not naive or stupid, he believes Crozier "sent his alarming email with the intention of getting it to the public domain in an attempt to draw public attention to the situation on his ship."

Some officials reportedly aren't pleased with how Crozier's firing was handled. President Donald Trump said he "may just get involved" in the situation.

CORRECTION: A previous version of this story was unclear about Crozier's military rank. This version has been updated.