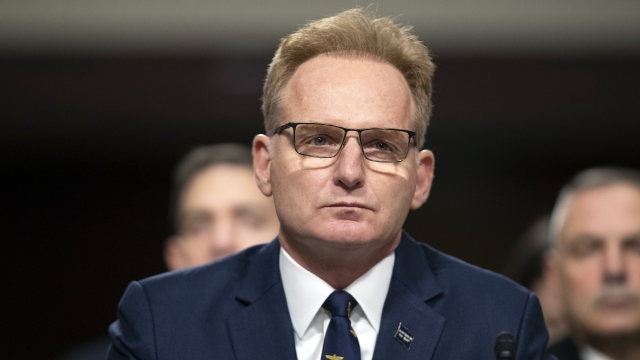 SMS
Acting Navy Secretary Resigns After Calling Captain 'Stupid'
By Bailey Vogt
By Bailey Vogt
April 7, 2020
Capt. Brett Crozier was relieved of command after he shared a memo detailing his concerns about COVID-19 spreading on his ship.
SHOW TRANSCRIPT

The acting secretary of the Navy resigned Tuesday after his speech to the crew of a fired commander was leaked.

Thomas Modly stepped down just hours after apologizing for blasting ousted Capt. Brett Crozier as "too naive or too stupid" to lead the USS Theodore Roosevelt — an aircraft carrier stricken with the coronavirus.

Crozier was relieved of command last week after he detailed concerns about COVID-19 spreading on his ship in a memo. Modly said while Crozier was right to raise concerns, the way he widely distributed the memo showed "extremely poor judgement" and "created a panic" among Crozier's crew and their families.

Modly then addressed the sailors on Crozier's former ship on Sunday. He told them to stop complaining about Crozier's firing because the captain had "compromised critical information" to draw "attention" to the ship's coronavirus pandemic, calling it a "betrayal of trust." After the speech leaked, Democrats in Washington — including House Speaker Nancy Pelosi — called for the acting secretary's resignation.

The USS Theodore Roosevelt had nearly 200 confirmed cases of the coronavirus as of Monday, and 2,000 of the over 4,800 crew members had been removed from the ship to be tested.

Crozier has also tested positive for the virus.

Modly will be replaced by Undersecretary of the Army James McPherson.