The Acting Head Of The DEA Is Planning To Step Down 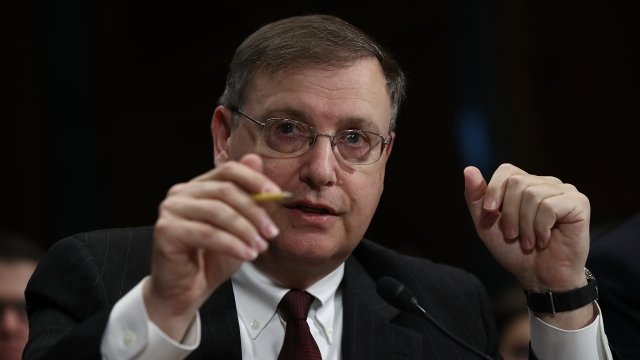 SMS
The Acting Head Of The DEA Is Planning To Step Down
By Lindsey Pulse
By Lindsey Pulse
September 27, 2017
Chuck Rosenberg reportedly sent an email to staff Tuesday saying he'd leave in less than a week.
SHOW TRANSCRIPT

The acting head of the Drug Enforcement Administration, Chuck Rosenberg, is stepping down.

Rosenberg took the position in 2015 under then-President Barack Obama. Multiple outlets report he sent an email to staff Tuesday saying he'd leave in less than a week.

Rosenberg was previously a U.S. Attorney in Texas and Virginia under former President George W. Bush. After that, he served as former FBI Director James Comey's chief of staff.

The New York Times reports officials say Rosenberg could be leaving, in part, because of President Donald Trump.

In July, Trump gave a speech to local, state and federal law enforcement. Rosenberg told DEA staffers in an email a day after that part of Trump's talk seemed to condone police misconduct.

"You just see them thrown in, rough — I said, please don't be too nice," Trump said. "Like, when you guys put somebody in the car and you're protecting their head, you know, the way you put their hand over? Like, don't hit their head, and they've just killed somebody — don't hit their head. I said, you can take the hand away, OK?"

Also in that July internal email, Rosenberg reinforced the agency's values, adding, "We must earn and keep the public trust and continue to hold ourselves to the very highest standards."

Correction: An earlier version of this video misstated Rosenberg's previous positions in the Department of Justice. The video has been updated.