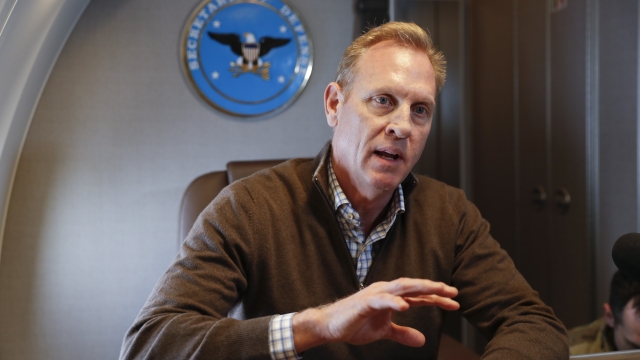 SMS
Acting Defense Secretary Shanahan Resigns, Will Not Seek Confirmation
By Ahmed Jawadi
By Ahmed Jawadi
June 18, 2019
Shanahan says he won't seek confirmation as secretary of defense after past domestic violence incidents involving his family were made public.
SHOW TRANSCRIPT

Acting Defense Secretary Pat Shanahan has announced he is stepping down and removing himself from consideration to be the permanent secretary of defense.

On Tuesday, President Donald Trump tweeted that Shanahan "decided not to go forward with his confirmation process so that he can devote more time to his family." The announcement came shortly after reports surfaced of past violent incidents within Shanahan's family.

According to USA Today, the FBI had been investigating a nearly decade-old incident between Shanahan and his now-ex-wife as part of a routine background check. Both Shanahan and the woman told police the other had hit them. Shanahan said he "never laid a hand on" his ex-wife and that the subsequent police investigation "resulted in her being charged with assault against [him]." He dropped the charges "in the interest of [his] family" and filed for divorce shortly after.

The Washington Post detailed another incident involving his ex-wife and their son. The two had reportedly gotten into "a verbal dispute" that led Shanahan's son to hit the woman repeatedly with a baseball bat. At the time, Shanahan said his son had acted in self-defense. But he has since walked that back, saying that he "never believed [his son's] attack ... was an act of self-defense or justified" and that "bad things can happen to good families."

In a statement announcing his resignation, the outgoing acting defense secretary said he believes the confirmation process would "force [his] three children to relieve a traumatic chapter in [their] family's life and reopen wounds [they] have worked years to heal." He said he "would welcome the opportunity to be Secretary of Defense, but not at the expense of being a good father."

Shanahan joined the Trump administration in 2017 as a deputy to then-Defense Secretary Jim Mattis. He took over the role after Mattis resigned late last year.

President Trump said Tuesday he plans to name Secretary of the Army Mark Esper as his acting defense secretary.