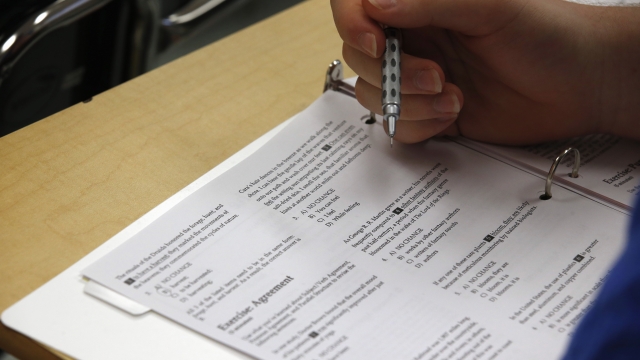 SMS
Coronavirus Postpones, Cancels SAT And ACT Exams
By Amy Morona
By Amy Morona
March 26, 2020
Some colleges and universities are already dropping the tests as admission requirements in light of the coronavirus.
SHOW TRANSCRIPT

As a tutor, Jennifer Jessie is used to having the responses her students need. But navigating the coronavirus pandemic is something she can't solve.

"It felt like the first time in my life that I didn'r have answers for my students at all," she said.

Jessie has been coaching young people on how to take college entrance exams like the ACT and SAT for seven years. This year is different, though. The virus has forced the companies behind each exam to cancel or postpone several spring testing dates.

It's left some of the roughly 2 million students who take each test unsure of when they'll next take an exam or how to adequately prepare, especially since most states have already closed schools through at least April or May, with some canceling classes for the remainder of the academic year.

The companies are offering refunds for the exams or the option to reschedule to a later date. But it's unclear if federal guidelines currently in place for Americans to curb the spread of the virus will be lifted by the next offerings.  And timelines can be tight in the college admission process, according to Jayne Fonash, who is an independent college counselor and also the president of the National Association for College Admission Counseling.

"I often advise students to be sure to take either an ACT or SAT in the spring of their junior year, get the experience for the test, so they have plenty of time to take a second test in late the summer or early in the fall," she said. "Now it looks like that opportunity has, at best, been limited or, at worst, maybe eliminated."

And some believe those high school juniors and underclassmen could be the most impacted.

"If a school is out right now for the entire year, and this test is premised on the idea that it's covering content in school, then how do we test a student who has not been educated, or some students who have online learning but other students don't have access to that online learning?" said Jessie.

Now, she points out that parents may have to figure out ways to make up for a lack of in-person instruction their kids typically receive at school. That could create an equity gap, an issue 16-year-old Emanuelle Sippy is concerned about. She was prepping to take an ACT offered by her district in March before her classes were canceled.

"For those of us who were focusing most, like, the week beforehand, that progress is probably not going to be there for a June test date, that studying probably needs to happen again," she said. "Or in the case of students who don't have those privileges to be able to be studying right now, that studying might not happen at all, and taking the test on the rescheduled date might not happen."

The Kentucky junior is part of a national student advocacy group that created an online petition calling for colleges and universities to make the test optional for admission.

It's a trend that's already been on the rise. More than 1,000 colleges and universities already don't require the ACT or SAT, according to the National Center for Fair and Open Testing. It's a group that pushes campuses to drop tests as a requirement.

And that number is growing. A handful of additional schools nationwide, including Massachusetts' Tufts University, Ohio's Case Western Reserve University and all of Oregon's public universities have already decided to drop the test scores for future applicants due to concerns over the impact of the virus.