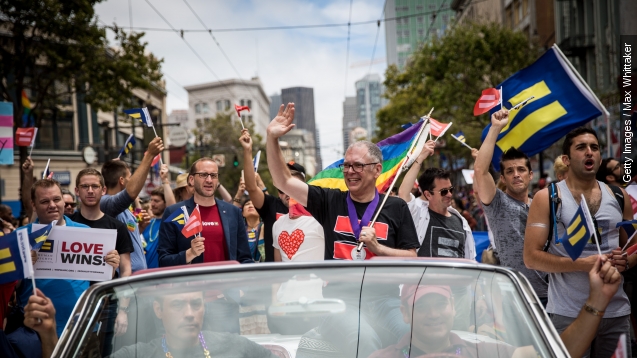 SMS
Acquiring Someone's Story For A Biopic Isn't Always Simple
By Lexie Hammesfahr
By Lexie Hammesfahr
July 8, 2015
20th Century Fox got the life rights of Jim Obergefell, plaintiff in the SCOTUS same-sex marriage case. But getting those rights can be tough.
SHOW TRANSCRIPT

20th Century Fox announced Tuesday it had acquired the life rights of Jim Obergefell and Al Gerhardstein, the lead plaintiff and attorney of the historic Supreme Court same-sex marriage case.

Fox also landed rights to an upcoming book by Obergefell and Washington Post journalist Debbie Cenziper; it's called "21 Years to Midnight: The Promise that Brought Marriage Equality to America."

It also can give those subjects a chance to control how their story is told, like in Clint Eastwood's upcoming "Miracle on the Hudson" biopic.

The movie will be based on Capt. Sully Sullenberger’s memoir. You might remember he landed a commercial plane on the Hudson River. Sullenberger and his wife will be consultants for the film.

The law is a little more forgiving when the story is about a deceased subject. Studios don't have to worry about those defamation or invasion of privacy suits.

But they can still run into trouble with the subjects' estates. Take, for example, "Selma."

"Those that have gone before us say 'No more,'" actor David Oyelowo said.

Even though King's story is fair game, his words aren't. Director Ava DuVernay wrote new speeches for the film to avoid being tied to King’s estate during production.

She told Deadline, "We had to un-anchor ourselves from the words in order to get at them."

In contrast, Dreamworks took the step of acquiring MLK's life rights from the King estate in 2009. That means the studio could use King's words without those legal headaches, unlike the "Selma" producers.

Fox’s Obergefell film will be produced in its Fox 2000 division alongside Temple Hill Entertainment — the studio that has the "Twilight" franchise and "The Fault in Our Stars" in its wheelhouse. A release date hasn't been set.