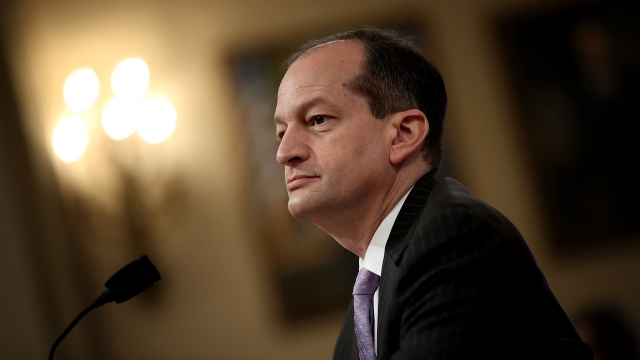 Labor Secretary Alexander Acosta is stepping down amid controversy over his handling of a plea deal he cut with Jeffrey Epstein back in 2008.

Acosta announced his resignation Friday morning while standing outside the White House with President Donald Trump.

"I called the president this morning. I told him that I thought the right thing was to step aside. ... It would be selfish for me to stay in this position and continue talking about a case that's 12 years old rather than about the amazing economy we have now," Acosta told reporters.

Acosta's decision comes just two days after he defended his role in Epstein's prosecution more than a decade ago when he was serving as the U.S. Attorney for the Southern District of Florida.

Epstein was accused of sexually abusing dozens of underage girls in the early 2000s. But that plea deal allowed him to avoid federal charges. He pleaded guilty to two lesser counts in state court and served 13 months in a county jail facility that let him leave six days a week to work out of his office. He was required to register as a sex offender as part of that deal.

"We believe that we proceeded appropriately. ... Based on the evidence, there was value to getting a guilty plea and having him register," Acosta said Wednesday.

President Trump praised Acosta on Friday, telling reporters that he thought Acosta was a "tremendous talent" and a "fantastic Secretary of Labor."