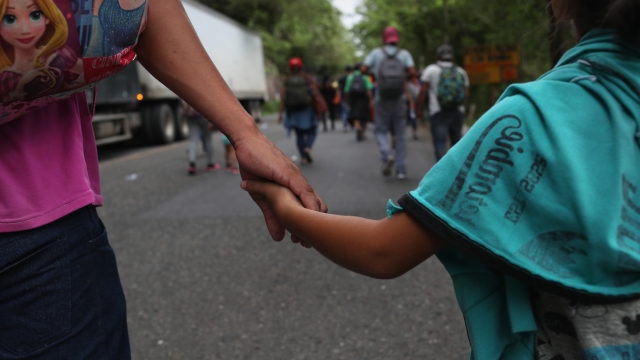 The ACLU is suing the Trump administration over its controversial "safe third country" agreements with Guatemala, Honduras and El Salvador.

The ACLU and a handful of other advocacy groups filed the lawsuit Wednesday asking a federal judge to block the agreements. The suit claims they violate the law and puts asylum seekers at risk "by denying them the right to apply for asylum in the United States and shipping them to dangerous countries where there is virtually no chance they will find refuge."

The "safe third country" agreements require asylum-seekers who pass through Guatemala, Honduras or El Salvador to apply for protections there before going to the U.S.

The UN Refugee Agency says "burden-sharing" arrangements like these are "reasonable", as long as they prioritize the refugee's protection.

But the lawsuit argues those countries are not safe at all, saying they are "extremely dangerous, refugee-producing countries with asylum systems that are skeletal at best."

U.S. travel advisories for all three countries currently warn that "violent crime, such as armed robbery and murder, is common."

As Newsy has previously reported, the Trump administration said U.S. immigration judges reject most Central American migrants, so it's better for them to seek asylum earlier in their journeys rather than making the long, dangerous trek to the U.S.

The lawsuit was filed on behalf of multiple asylum seekers who say they are in danger because of the policy. One is a gay man from El Salvador who was sent to Guatemala, a country he argued was "unsafe for gay people." Another is a man who fled MS-13 gang violence in Honduras, came to the U.S., but was sent to Guatemala, where he says MS-13 could still find him.