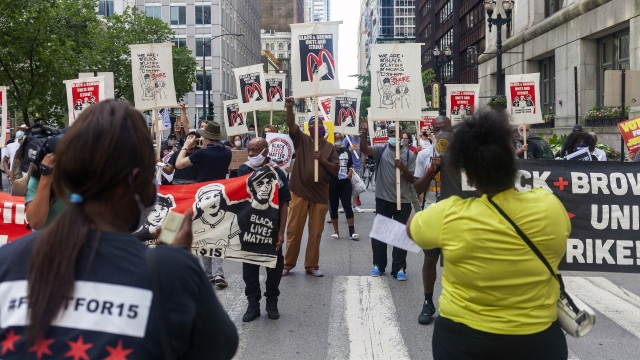 Chicago is bracing for a reported 150 federal agents from the Homeland Security Department to arrive in the city.

Newsy spoke with top officials at the Illinois branch of the American Civil Liberties Union and Chicago police's largest union, who see it very differently:

"This is an assault on the rights of Americans," says Colleen Connell, Executive Director of the American Civil Liberties Union of Illinois.

"I think any help would be gladly appreciated," says Michael Mette, a Vice President at Fraternal Order of Police, Chicago Lodge 7.

The Chicago Tribune broke the news of deployment preparations after President Donald Trump denounced cities led by Democrats and threatened to send in federal personnel to quell civil unrest and violence.

“New York and Chicago and Philadelphia, Detroit, and Baltimore and all of these, Oakland is a mess. We’re not going to let this happen in our country. All run by liberal Democrats,” the president said in the White House.

The federal agents will reportedly be deploying this week and they will stay at least two months. They typically focus on human trafficking and drug and weapons smuggling.

The ACLU tells Newsy this plan is “laughable,” because agents aren't familiar with the city or its neighborhoods. They're considering filing a lawsuit, depending on how the agents are deployed.

"We think that it really raises, I think, the image of, you know, of an administration whose response to any dissent in this country is to send in essentially a federal occupying force," says Connell.

The ACLU is also concerned other cities could be next, and its New York and Philadelphia offices are watching carefully. Tensions are running high after a chaotic weekend in Portland, Oregon, where police and protesters clashed, and federal officers detained demonstrators with unmarked vehicles.

"I think that it's hypocrisy of the highest order. This administration has done everything possible to frustrate the efforts of cities and states, to control the proliferation of guns," says Connell.

But Chicago’s police union recently implored the president for help in a letter, saying officers find themselves under assault at protests, while shootings and homicides are on the rise.

The union tells Newsy it supports limited surveillance of protesters and the removal of name tags from police uniforms because officers are being doxxed online.

"They're looking them up and then they're starting to spread their home addresses, their wives' names, daughters' names, threatening to murder and rape their wives and daughters," Mette says.

As a summer of unrest continues, the victims hail from both sides: Chicago’s Civilian Office of Police Accountability says it received more than 20 complaints against police because of protests last Friday. The Chicago Police Department says 49 officers were injured at the event, telling Newsy in a statement “it’s critical” any deployed federal agents coordinate with them.

"Every single day, all we're doing is talking about what makes us different instead and what makes us the same. We're all human beings, and we need to start acting like humans," says Mette.