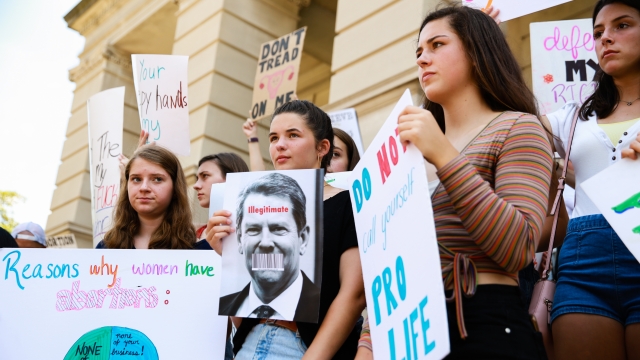 SMS
ACLU, Planned Parenthood Sue Georgia Over Strict Abortion Law
By Caitlin Baldwin
By Caitlin Baldwin
June 28, 2019
Plaintiffs are asking the judge to issue a preliminary injunction for the so-called "fetal heartbeat" measure before it goes into effect in January.
SHOW TRANSCRIPT

Georgia's new controversial abortion bill is being challenged in court. The ACLU, Planned Parenthood and the Center for Reproductive Rights filed the lawsuit against Georgia Gov. Brian Kemp, the state's attorney general and other state officials Friday.

Gov. Kemp signed the bill into law in May. The so-called "fetal heartbeat" measure effectively bans abortions after a fetal heartbeat is detected, which is usually about six weeks into pregnancy.

The plaintiffs are asking the judge to prevent the law from going into effect in January. The suit argues the legislation is a violation of the 14th Amendment and is an attack on minorities and low-income residents.

The ACLU of Georgia says these private reproductive decisions should be made by each individual woman, adding, "Politicians have no place in these personal decisions."

The lawsuit is something Gov. Kemp saw coming. Back in May he said, "I realize that some may challenge it in the court of law. We will not back down. We will always continue to fight for life."

That could be because supporters of the law want the suit to be blocked by the lower court and appealed all the way to the Supreme Court in an effort to overturn Roe v. Wade.