ACLU: Over 900 Migrant Kids Separated From Parents Since June 2018 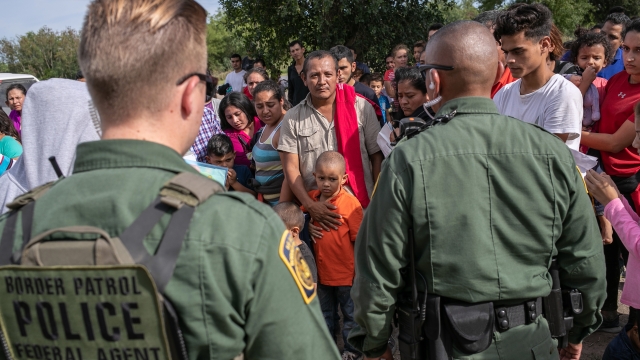 The American Civil Liberties Union says nearly 1,000 children have been separated from their parents at the U.S.-Mexico border since a judge ordered the separations to stop over a year ago. On Tuesday, the organization urged the judge to specify when separations should be deemed necessary.

ACLU lawyers filed documents in the U.S. District Court in San Diego stating that 911 children have been separated from their families since June 26, 2018. They cited statistics the ACLU received from the government as part of ongoing legal proceedings.

Families can be separated at the border if a parent is deemed a risk to their child. But the ACLU says families are being split up over offenses such as traffic violations. It gave examples, including a case where a migrant father was reportedly separated from his 4-year-old son because he could not clearly answer Border Patrol agents' questions. Lawyers say that man has a speech impediment.

One of the ACLU's lawyers, Lee Gelernt, said, "They're taking what was supposed to be a narrow exception for cases where the parent was genuinely a danger to the child and using it as a loophole to continue family separation. What everyone understands intuitively and what the medical evidence shows, this will have a devastating effect on the children and possibly cause permanent damage to these children, not to mention the toll on the parents."

According to the ACLU and other advocacy organizations, only a small fraction of the 911 children separated from their families since June 2018 were actually at risk from their guardians.

The Young Center for Immigrant Children's Rights is an advocacy group for unaccompanied and separated migrant children. Policy Director Jennifer Nagda told the House oversight committee that in nearly all of the cases her group has been appointed to, separations were "devastating" to families and "contrary to the best interests of the child."

In May, acting Homeland Security Secretary Kevin McAleenan told a Senate committee that family separations are "extraordinarily rare" and only happen "under very controlled circumstances." He testified in July that out of the 1,500 to 3,000 migrant family members apprehended each day, about one to three separations occurred.

McAleenan also said separations are "governed by policy and by court order" to protect the children. But according to the Young Center, children spent an average of roughly four months in federal custody, partially due to the fact that lawyers and case workers could not locate their parents or assess why the separation occurred. Over 40% of the 120 children the Young Center represented were 5 years old or younger.

On June 20, 2018, President Donald Trump ordered officials to stop separating families. Less than a week later, a judge ordered that families be reunited swiftly. But that process is dragging on because the government didn't properly track family members after splitting them up.