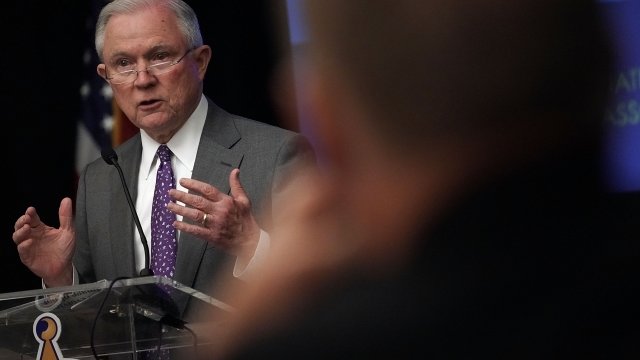 SMS
ACLU Files Suit Against Jeff Sessions Over Asylum Restrictions
By Jake Jones
By Jake Jones
August 7, 2018
Sessions cut back on who qualified for asylum in June.
SHOW TRANSCRIPT

The ACLU filed suit against Attorney General Jeff Sessions on Tuesday over his restrictions on who could claim asylum in the U.S.

In early June, Sessions overruled a previous decision to allow certain asylum-seekers safe haven in the U.S. The lawsuit was filed on behalf of 12 immigrant parents and children it says should not be required to return home.

For example, one immigrant woman, whom the lawsuit calls Grace, fled Guatemala in fear of an abusive husband, gang violence and sexual assault.

The Board of Immigration Appeals had ruled in 2014 Grace was a married woman who could not leave her abusive relationship, and therefore qualified as a "member of a particular social group." Sessions' decision overruled that one.