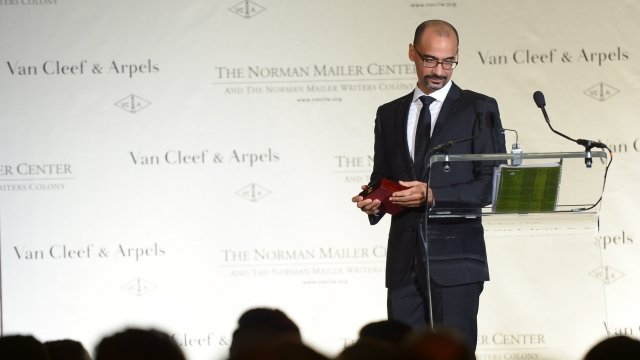 Díaz stepped down as the Pulitzer Prize board's chairman amid sexual misconduct and verbal assault allegations against him.

Prominent Dominican-American author Junot Díaz stepped down as a chairman of the Pulitzer board Thursday after allegations of assault. The Pulitzer Prize winner is known for his writings on the Latino immigrant experience.

While promoting one of his books on "The Daily Show," he said: "Look, white people didn't just materialize in this hemisphere. All these folks, if you're not indigenous, you're part of this thing called immigration. And not wanting to recognize it not only erases the bloody history of why were here, but it's such a rank attack on the community that really powered this nation."

University of Missouri theater students organized a "Me Too Monologues" event for survivors of sexual abuse, misconduct and harassment.

Díaz recently wrote in The New Yorker about being raped as a child. He wrote: "I can say, truly, que casi me destruyó" — "that almost destroyed me." He also said his assault defined him more than his being Dominican or an immigrant. He wrote that dealing with that traumatic experience hurt the many women he dated.

But after that story's publication, writer Zinzi Clemmons accused Díaz of forcibly kissing her several years ago. On Twitter, she wrote: "I was an unknown wide-eyed 26 yo, and he used it as an opportunity to corner and forcibly kiss me. I'm far from the only one he's done this 2."

Other female authors have since stepped forward to accuse Díaz of verbal abuse and misconduct.

Following the allegations, Díaz released a statement saying he intended to take responsibility for his past. "This conversation is important and must continue," he wrote. "I am listening to and learning from women's stories in this essential and overdue cultural movement."

While Díaz has stepped down as the Pulitzer board chairman, he'll continue to be part of the board. MIT, where Díaz teaches, is reportedly investigating the allegations as well.

Work harassment is most common in the hospitality and food services industry, where women of color and immigrants are disproportionately represented.

Even though admirers of Díaz's work have shared their disappointment, one writer says these allegations mean even more to the Latino community: "As members of an underrepresented group, we celebrate the success stories in our communities. … He might become just another fallen idol in the literary world, but for the Latinx readers who looked up to him, his betrayal feels so much more personal, like a tío who let us down."

Díaz isn't the only literary figure impacted by the #MeToo movement. This year's Nobel Prize in literature will be postponed for the first time in nearly 80 years due to an ongoing sexual harassment scandal.