Access To Water Is A Growing Concern Around The World 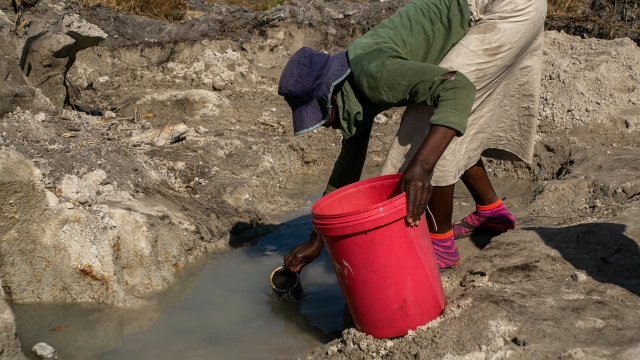 SMS
Access To Water Is A Growing Concern Around The World
By Ethan Weston
By Ethan Weston
August 1, 2019
Climate change has the potential to make water even scarcer worldwide.
SHOW TRANSCRIPT

That's the reality for over 2 million people in Zimbabwe's two major cities, Harare and Bulawayo. In June, those cities began rationing water. And now many people there rely on open wells, streams and merchants for water.

Two of the four reservoirs near Harare are empty. That city's mayor told The New York Times as much as 60% of the remaining water is being lost through leakage and theft.

The lack of water is causing concern amongst some local NGOs that there could be cholera outbreaks. And much of the water still available to residents requires expensive treatment to make it drinkable.

But Zimbabwe's drought is just one of many water-related issues around the world causing shortages or disrupting crops.

In Southeast Asia, a severe drought dropped the Mekong River to its lowest level in over 100 years — a problem caused by late monsoon rains, El Nino and climate change. People along the river reportedly couldn't plant rice, the region's main crop.

A deadly heat wave and late monsoon rains exacerbated water shortages in India. CNN reports 21 major cities there could run out of groundwater — which makes up 40% of the country's water supply — next year.

And in the U.S., a more than 7-year drought in California finally ended back in March. But the U.S. Forest Service predicts in around 50 years, almost half of the country's freshwater basins won't be able to meet monthly demand.

That prediction seems to be pretty on-point for the rest of the world, too. Right now, some 4 billion people across the globe face severe water scarcity for at least one month a year. And some research suggests the issue might be made worse by climate change.