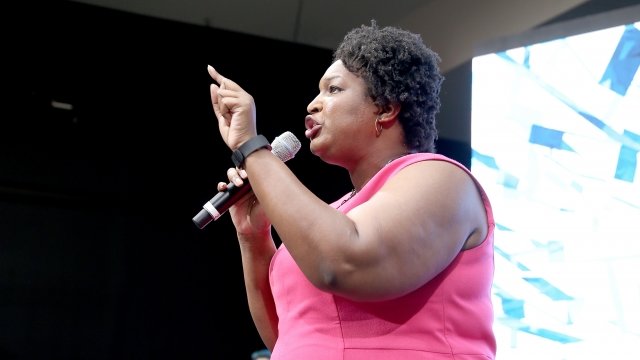 SMS
Abrams Makes History By Winning Ga. Democratic Primary For Governor
By Katherine Biek
By Katherine Biek
May 23, 2018
With her win, Stacey Abrams is now the first black woman in the country to be a major party nominee for governor.
SHOW TRANSCRIPT

Stacey Abrams is now the first black woman in the country to be a major party nominee for governor after she won the Democratic primary in Georgia's gubernatorial race Tuesday.

In what became known as the "Stacey v. Stacey" primary, Abrams defeated former state Rep. Stacey Evans with about three-quarters of the vote.

It's unclear who her Republican challenger will be though, since none of the candidates who ran in the Republican gubernatorial primary got a majority of the vote.

The top two finishers — Lt. Gov. Casey Cagle and Secretary of State Brian Kemp — advanced to a runoff that'll be held on July 24.