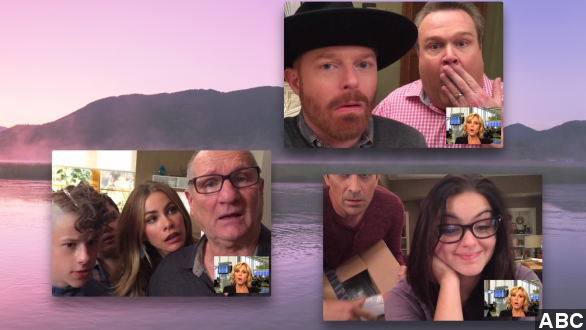 ABC's "Modern Family" is going where no TV family has gone before.

Next week, the sitcom will trade in its TV cameras for smartphones and tablets.

That's right, just about all of next week's "Modern Family" episode was shot on smart devices.

Show co-creator Steve Levitan explained at a Q&A last week he was inspired by his own family experience.

"I have two daughters at college, and we do a lot of FaceTiming. ... One day I was on my computer, and I had some emails open, and some websites, and then my daughter showed up."

Show execs say the episode was also influenced by the short film "Noah," which plays out entirely on a character's computer screen while he goes through a breakup.

Re/code reports Apple provided the iPhones and iPads for the episode, but the show received no funds from the company for product placement.

Needless to say, filming the episode was tricky, and several sets had to be shooting at one time in order for it to work.

Plus, the actors had trouble getting the right shots, so crew members sometimes had to hold the devices while the actors grabbed the operators' arms to make it look like they were in control.

The show will air next Wednesday, February 25.