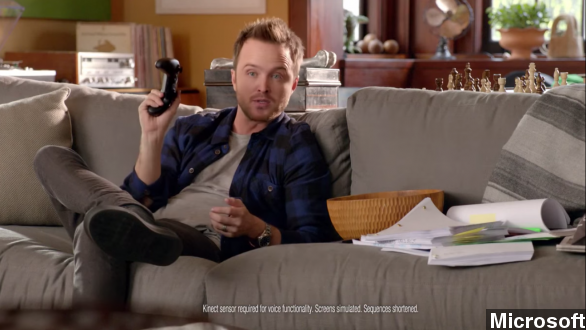 By Madison Burke
June 13, 2014
In the commercial, Aaron Paul gives his Xbox commands — and this turns on people's Xboxes in their homes through the console's Kinect voice sensor.
SHOW TRANSCRIPT

"Breaking Bad" star Aaron Paul is controlling Xbox One consoles all over the world. How is this possible, you ask?

The command Paul says in this Xbox commercial turns on other people's Xboxes through the console's Microsoft Kinect voice sensor. (Via Microsoft)

On social media, Xbox customers have posted videos of the commercial triggering their game systems' startup. (Via YouTube / skedoozy)

This customer tweeted that the commercial turned on his console. And a follower tweeted back, "Well at least it works right?" (Via Twitter / @HereWeVivek)

And there's another twist to that commercial.

CNET points out at the end of the ad, "Microsoft puts up a screen that mentions its new Kinect-free bundle now available for $400 instead of the $500 bundle that includes the Kinect." The writer notes this could be confusing to customers who don't really know the gaming industry and wonder why their $400 Xbox One doesn't come with the Aaron Paul on-demand feature.

If users don't want their Xboxes magically turning on all the time, they have the option of just turning off the Kinect voice sensor.