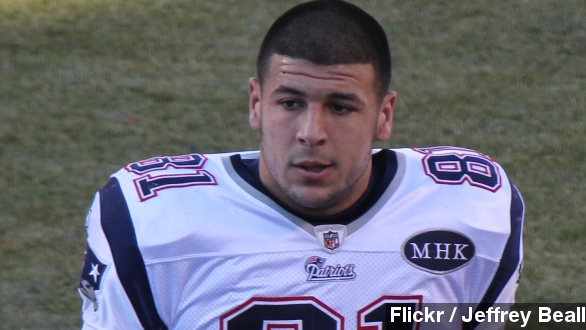 By Christine Slusser
June 23, 2014
Aaron Hernandez was taken to a hospital Sunday for about an hour.
SHOW TRANSCRIPT

Aaron Hernandez, the former New England Patriots player who was charged for multiple murders, was hospitalized over the weekend. (Via Flickr / Jeffrey Beall)

"The former Patriots tight end was taken to St. Lukes hospital for about an hour on Sunday. The reason for the hospital visit isn't known, but his lawyers recently pushed the Patriots to release his medical records." (Via WHDH)

WBZ-TV reports, "Hernandez was taken from the Bristol County House of Corrections in North Dartmouth late Saturday morning to St. Luke’s Hospital in New Bedford for treatment of a medical issue."

"Officials aren't giving many details, but say that he wasn't injured in a fight and there were not security issues at the jail. He's accused of killing three people. He's pleaded not guilty to all charges." (Via HLN)

On Friday, The Boston Globe reported Hernandez requested to move out of the Bristol County Jail to be closer to his attorneys in Boston.

"Hernandez is also claiming that while he’s been held at the Bristol jail he has been subjected to 'unreasonable restrictions' on his ability to confer with his counsel."

Hernandez has plead not guilty to all murder charges. He also faces civil wrongful death lawsuits.