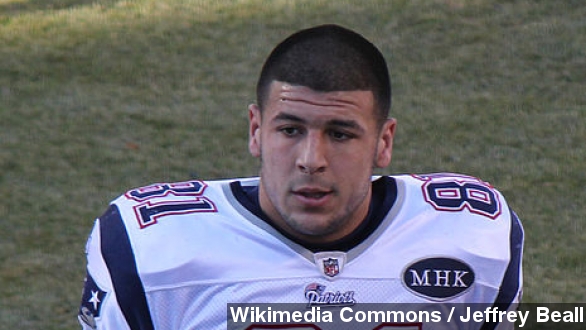 By Briana Koeneman
May 15, 2014
Former New England Patriots star Aaron Hernandez has been indicted on murder charges in the 2012 drive-by shooting of two men in Boston.
SHOW TRANSCRIPT

Another shocking development in the legal woes of Aaron Hernandez.

"Former New England Patriots tight end Aaron Hernandez has been indicted in the 2012 killings of two men in Boston. This, according to multiple reports." ​(Via ESPN)

According to The Boston Globe, Hernandez has been charged with two counts of first-degree murder in the deaths of Daniel Abreu and Safiro Furtado. Investigators say they were both killed in a drive-by shooting while stopped at a traffic light in Boston's South End on July 16, 2012.

"Our investigation has not uncovered any evidence that these several individuals were known to each other. But their chance encounter inside the club culminated in these murders." (Via WFXT)

Conley said two other passengers who were inside the vehicle at the time were able to escape on foot, and a third individual suffered a gunshot wound to the arm.

Police say the two victims, who WFXT's Ted Daniel reported were best friends, were "ambushed and executed" after they left the club. Neither reportedly had a criminal record. (Via Twitter / @TedDanielFOX25)

Hernandez's suspected involvement was first suggested when court documents from the unsolved double murder were unsealed in January, as CNN points out. The records said, "There is ... probable cause to believe that Aaron Hernandez was operating the suspect vehicle used in the shooting homicides ... and may have been the shooter."

As many already know, this isn't the only time Hernandez has been accused of murder.

The Boston Globe reported last August that a motive for Lloyd's killing may have been that he knew about Hernandez's involvement in that drive-by shooting.

On top of the two first-degree murder charges, Hernandez also faces three counts of armed assault with attempt to murder. He is expected to be arraigned in the killings next week.