A Week After A Poor Debate Performance, Rubio Wins One 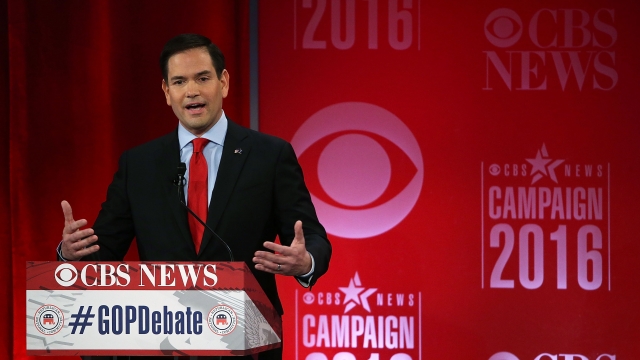 Republican presidential candidate Marco Rubio won the poll he may have needed most right now.

Thirty-two percent of participants in a CBS poll said he was the winner of Saturday night's GOP debate. Donald Trump took second with 24 percent and John Kasich third with 19 percent.

Rubio's win follows a fifth-place loss in the New Hampshire primary days before. He attributed the lack of votes to a poor debate performance leading up to the primary.

"It's on me. I did not do well on Saturday night –– so listen to this –– that will never happen again," Rubio said to supporters following the New Hampshire primary.

At the latest debate, candidates discussed the Iraq War, Social Security and whether a new Supreme Court justice should be appointed before the election.

In one of the most-talked-about moments, Rubio claimed opponent Ted Cruz couldn't speak Spanish. Cruz then challenged Rubio in Spanish to comment on President Obama's executive orders in the language as well.

Only time will tell if his debate win will help him catch up to Trump, who leads him by almost 23 percent in the upcoming South Carolina primary.