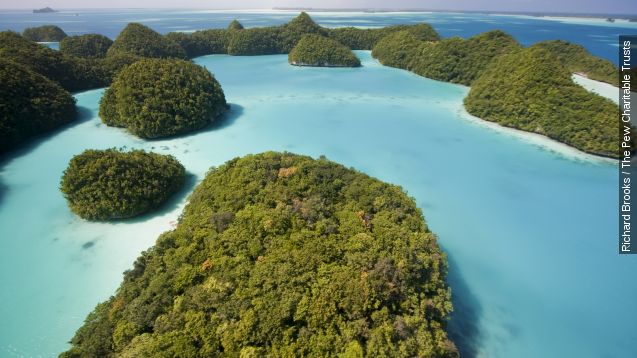 This is Palau. The small archipelago nation is home to just 18,000 people but nearly 1,300 species of fish and 700 types of coral.

The new marine sanctuary will span 193,000 square miles and will ban fishing and mining. (Video via The Pew Charitable Trusts)

The nation's president said: "Creating this sanctuary is a bold move that the people of Palau recognize as essential to our survival. We want to lead the way in restoring the health of the ocean for future generations."

In 2009, Palau also created the world's first shark sanctuary. In total, more than 80 percent of its waters are legally protected.

But Palau isn't the only one stepping up to protect life under the sea. This year alone three other countries pledged to protect massive ocean areas.

In March, Britain announced a new protected marine reserve at Pitcairn Island. That one is 332,000 square miles. (Video via The Pew Charitable Trusts)

Correction: An earlier version of this video said the reserve is larger than Texas and Alaska combined. That statistic includes all new marine reserves, not just Palau's. The video has been updated.