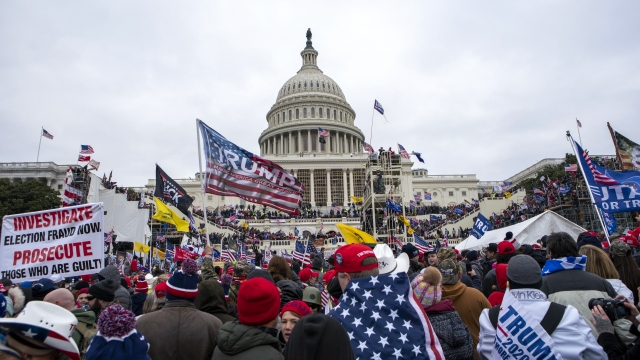 The House select committee investigating the Jan. 6 insurrection will hold its first public hearing Thursday at 8 p.m. The committee said it will present an overview of its findings with previously unseen material, witness testimony and a preview of future hearings, while discussing the timeline of events that day:

Before 9 a.m. on Jan. 6, the Park Police and Secret Service issued alerts that large crowds were forming ahead of the so-called "Save America" rally.

At noon, President Donald Trump began speaking at the rally, urging Vice President Mike Pence to reject Joe Biden's victory and send the electoral votes back to the states. He also urged supporters to go to the Capitol.

Several minutes later, there are objections to counting the electoral ballots from Arizona. and the House and Senate split to debate them.

At 1:30, protesters broke through police barricades around the Capitol.

At about the same time, pipe bombs are discovered outside the National Republican and Democratic Party Headquarters in Washington.

A little after 2 p.m., protesters broke windows and climbed into the Capitol. It goes into lockdown, and the House and Senate go on recess.

Meanwhile, Capitol Police officer Eugene Goodman prevents a confrontation with lawmakers by diverting protesters, who were just steps away from the Senate chambers.

At 2:24 pm., Trump tweets "Mike Pence didn't have the courage to do what should have been done to protect our Country and our Constitution."

For hours, protesters march through the Capitol, banging on doors, breaking into offices and destroying property.

Shortly after 4 p.m., Biden urged Trump to call for an end to the violence. Then Trump posted a video, again rejecting the election results and telling protesters he loves them, but they must go home.

At about 6 p.m., police start to clear the Capitol and secure the interior.

Washington's mayor puts the city under a 12-hour curfew.

Hours later, a seven-foot-tall fence is installed around the perimeter of the Capitol, and more than 6,000 National Guard troops are deployed to Washington in preparation for Inauguration Day.

A bipartisan Senate report last June found seven deaths were connected to the Capitol attack. The report came out a month before two more police officers died by suicide.