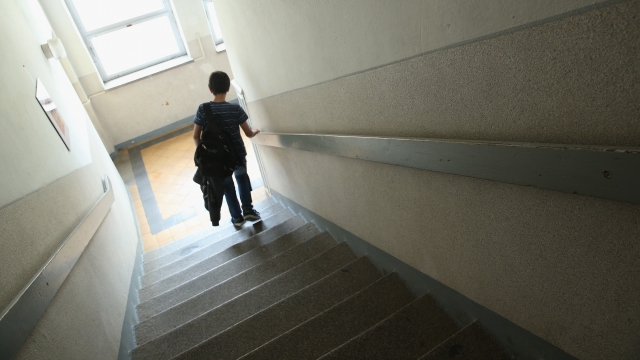 SMS
A Third Of Kids In The UK Spend Less Time Outside Than Prison Inmates
By Briana Koeneman
By Briana Koeneman
March 25, 2016
A survey funded by detergent brand Persil found 1 in 3 children in the U.K. spend less time outside than maximum-security inmates do.
SHOW TRANSCRIPT

We all know kids have been spending less and less time outdoors. But children's outdoor time has become so limited these days, even prisoners are shocked.

A new survey funded by laundry detergent brand Persil found 1 in 3 children in the U.K. spend less time outside than inmates in maximum security prisons.

The poll questioned more than 12,000 parents of children between the ages of 5 and 12 years old in 10 different countries. And in the U.K., researchers found almost a third of children play outside for 30 minutes or less on an average day, and 1 in 5 don't venture outdoors at all.

And when researchers went inside Indiana's Wabash maximum security prison to talk to inmates about their findings, they were floored, to say the least.

"I don't even know what to say to that," another said.

Persil has been working to encourage children to play outside for more than 10 years now with its "Dirt is Good" marketing campaign.

And the company's global equity director told Fast Company he was inspired to launch the survey after reading an "astonishing" article last year about Australian children spending less time outside than the average prisoner.

In an effort to solve this problem, Persil will reportedly partner with community-organizing group Project Dirt to launch outdoor educational events in the U.K., Brazil and Turkey.

This video includes clips from Persil and images from Getty Images.