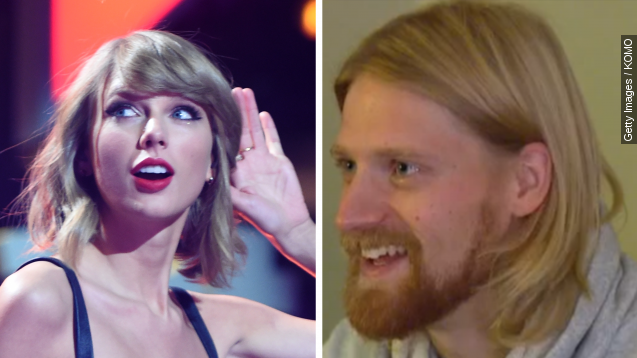 Turns out, there's another Taylor Swift, and he's a 30-year-old man living in Seattle.

"And then there's that moment when they're like, 'Wait, your name is actually Taylor Swift?'" the male Taylor Swift told KOMO.

Professional photographer Taylor Adam Swift says there was nothing particularly special about his name for the first 20 years of his life.

But then, in 2006, his female alter ego released her first chart-topping album, and he's been dealing with some unique obstacles ever since. (Video via Big Machine Records / Taylor Swift)

Swift's photography career has been buried under millions of music pages online, he gets fan letters intended for the pop star all the time and almost everyone gives him a hard time about his name at one point or another.

But despite all of that, he doesn't seem to mind sharing his name with an international star too much. (Video via Vogue Australia)

"It's a great confidence booster! It's like endless amounts of, 'You're beautiful, you're so talented, you're a great role model,'" Swift admitted.

Keep telling yourself that, Tay. But at least he's not the only one who's had to deal with the inconveniences of sharing a name with a celebrity.

And how can we forget the dozens of Ronald McDonalds Taco Bell found for one of its commercials? (Video via Taco Bell)

So rest assured, Taylor Adam Swift, you're not alone. Just shake it off, buddy. Shake it off.