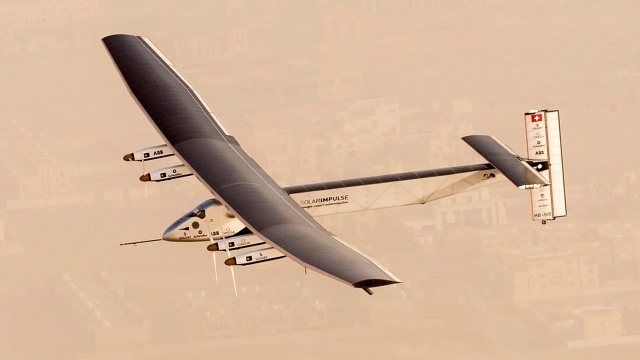 SMS
A Solar-Powered Plane Just Landed In NYC On Its Way Around The Globe
By Ben Lawson
By Ben Lawson
June 11, 2016
The Solar Impulse 2 is completely powered by solar panels on its 45-foot wingspan.
SHOW TRANSCRIPT

A solar-powered plane landed in New York City early Saturday morning, marking its last U.S. stop in its voyage around the world.

The Solar Impulse 2 runs entirely off solar energy collected from panels on its wings. Hence the nearly 45-foot wingspan.

It's not exactly a speedy plane, with an average speed of about 50 miles per hour. The globe-spanning journey — which began in Abu Dhabi, United Arab Emirates, in March 2015 — was expected to take about a year.

When it flew from Japan to Hawaii, it record the longest-ever nonstop solo flight in terms of time in the air. It flew for four days, 21 hours and 52 minutes.

But damage to the battery and changing seasons grounded the plane and kept it from reaching its goal within a year.

Bertrand Piccard, one of the plane's two pilots, said: "The most important thing isn't to make world records. It's to show what we can do with clean technologies."

The pilots are currently waiting for favorable weather conditions to cross the Atlantic since the plane needs very light winds to fly. That means they may have to wait several weeks to take off.