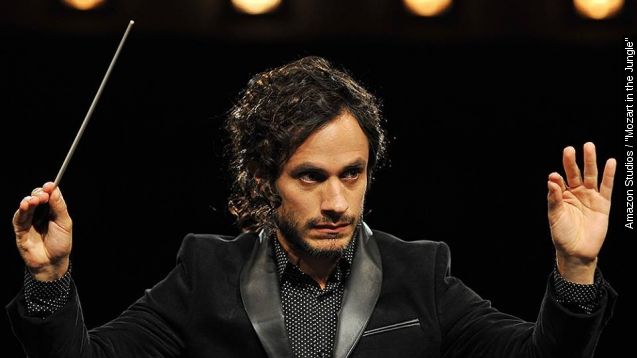 Sunday's Golden Globe Awards felt more like a ceremony to push out the old and usher in the new. And we're talking about the television categories, where only two awards went to network-affiliated shows.

In fact, the two shows that took home the most awards were both nominated for freshman seasons. "Mr. Robot" beat out shows like "Game of Thrones" and "Empire" in the drama and supporting actor categories. But that was more of a pleasant surprise. The USA show has become a critically acclaimed cult hit.

The real surprise was Amazon's "Mozart in the Jungle" beating out awards heavyweights like "Veep" and "Transparent" to win the top comedy award. The show's lead, Gael García Bernal, also won best performance by an actor in a television series, comedy or musical.

So for a show that turned enough heads to tie as the top TV winner of the night, why don't we even know what it's about?

For starters, "Mozart" is already in season two — so we have some binge-watching to do. The show is about high-brow classical New York musicians who have to figure out how to stay relevant in a music-streaming society.

The show is based on oboist Blair Tindall's memoir, "Sex, Drugs, and Classical Music."

One of the show's executive producers, Jason Schwartzman, best explained it to Vulture: "You go to classical music and you see tuxedos and you see a certain life, but you get a little close, and the tuxedo's stained. There's a hole in it. That's what a lot of this is about."

Leaving the perceived stuffiness of classical music out of it, the show focuses on orchestra members' lives just as much as the performance itself. And for that, it has a 95 percent approval rating on Rotten Tomatoes for season one. (Video via Amazon Studios / "Mozart in the Jungle")

And aside from what the two awards will mean for the show's future, it's a major win for Amazon.

This will be the second year Amazon Studios has won both major awards in TV comedy categories. Last year, "Transparent" had a similar sweep.