A Saudi Operation In Yemen Is Over, But Airstrikes Aren't 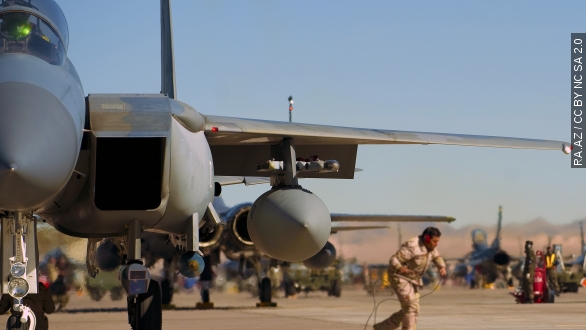 SMS
A Saudi Operation In Yemen Is Over, But Airstrikes Aren't
By Jake Godin
By Jake Godin
April 22, 2015
Saudi Arabia announced the end of its air campaign in Yemen on Tuesday, so why is the country still launching airstrikes against rebels?
SHOW TRANSCRIPT

Operation Decisive Storm is over, but that doesn't mean the airstrikes are. (Video via Saudi Arabian Ministry of Foreign Affairs)

"The operation is today in its third week, in terms of the air campaign. It has been very very successful, in fact it is proceeding beyond its initial, not objectives but goals," said Saudi Arabia's Ambassador to the U.S. Adel bin Ahmed Al-Jubeir on April 15.

On Tuesday, Saudi Arabia announced Operation Decisive Storm, its nearly month-long air campaign against Houthi rebels in Yemen, was at an end with its objectives completed. (Video via Nabaa TV)

But whether this is really a "mission accomplished" moment for Saudi Arabia depends on how you look at it.

The Saudi-led coalition began in late March, intending to roll back gains made by the Houthis and restore exiled President Abed Rabbo Mansour Hadi to power. (Video via CCTV)

Houthis still control large swaths of Yemen, including its capital Sanaa, and President Hadi remains in exile in Saudi Arabia.

But the airstrikes have been effective in degrading the Houthi's anti-air and other military capabilities. (Video via Egyptian Radio and Television Union)

At the same time, they've gotten a lot of criticism for causing civilian casualties. (Video via RT)

The end of Operation Decisive Storm ostensibly meant the end of the airstrikes. (Video via YouTube / Akram Alodini)

And yet Houthis in one of Yemen's largest cities, Taiz, were hit by airstrikes Wednesday after storming a Yemeni military base. (Video via YouTube / Yemen Shabab)

While Saudi Arabia's newest operation — dubbed Renewal of Hope, or Restoring Hope — will supposedly be more limited than Decisive Storm, the kingdom hasn't ruled out further airstrikes either.

The operation is aimed at reaching a political solution rather than degrading Houthi military power, but Saudi Arabia says it will still counter any Houthi military operations that try to obtain more weapons from government forces inside the country. (Video via Al Jazeera)

Saudi diplomatic sources told the BBC that's why Houthis were targeted by airstrikes in Taiz Wednesday, saying they "broke a promise." (Video via BBC)

According to the World Health Organization, as of April 17, at least 944 people have been killed and almost 3,500 injured in Yemen since mid-March.