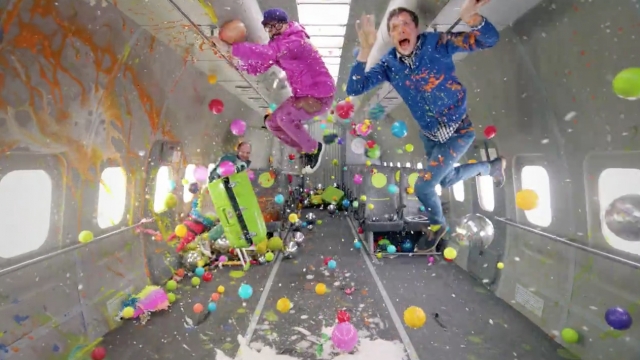 SMS
A Russian Space Center Helped OK Go Film A Music Video In Zero Gravity
By Samantha Crook
By Samantha Crook
February 11, 2016
OK Go made another intricate music video. This time, the band members were floating weightless around the cabin of a plane.
SHOW TRANSCRIPT

"Upside Down & Inside Out" used complex math to defy gravity on a plane. No green screens here.

"Tim, why are you playing with gravity?" an OK Go member asked in a video.

"Well, for one, gravity is cool," another OK Go member said.

They collaborated with a Russian airline and a space training center.

The group is known for another music video. Some say "Here It Goes Again" revived music videos in the YouTube era.

They've done other elaborate videos since then.

They made a giant Rube Goldberg machine with the help of engineers.

They collaborated with the Muppets, too.

And they've performed under water.