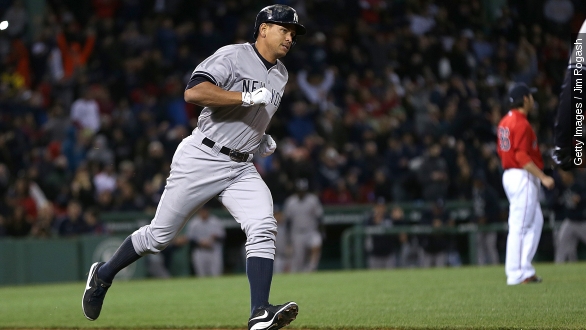 Alex Rodriguez is officially tied with Willie Mays for all-time home runs at 660 — and the homers could cost the Yankees big time.

Given his resurgent comeback, we knew this was bound to happen soon.

Alex Rodriguez has reached another historic home run milestone — or not, depending on who you ask.

But the Yankees marketing team probably won’t make too much of a big deal about his achievement when he returns to New York for a homestand next week, and that might have something to do with money.

The Yankees embedded marketing bonuses worth up to $30 million in his massive 10-year, $275 million contract, which A-Rod signed following the 2007 season.

According to those terms, the Yankees now owe him an additional $6 million for home run No. 660.

Although this might be all a moot point because the Yankees reportedly don't plan on paying up.

One source told the New York Daily News in January the team believes it's off the hook because they say A-Rod’s suspension over PEDs violated the league’s collectively-bargained drug policy.

"Their argument will be that it’s worthless because when A-Rod ties Willie Mays, it’s not going to be some great moment at Yankee Stadium," ESPN writer Andrew Marchand said.

So, don’t expect the tension between the Yankees and A-Rod to leave anytime soon.