A Record Number Of Teens Are Vaping, But Their Opioid Use Has Declined 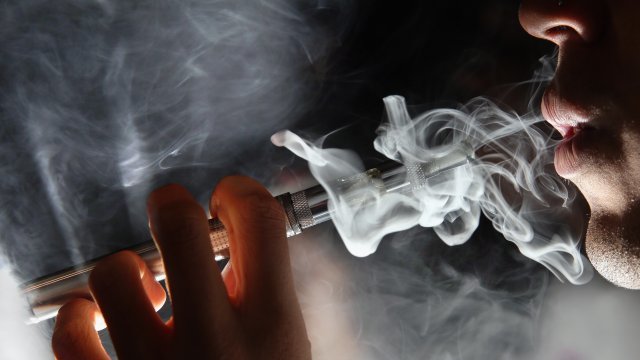 SMS
A Record Number Of Teens Are Vaping, But Their Opioid Use Has Declined
By Cristina Mutchler
By Cristina Mutchler
December 17, 2018
A federal study released Monday shows the number of high school seniors who reported vaping within the last month almost doubled from 2017 to 2018.
SHOW TRANSCRIPT

A government study released Monday is showing what some experts call an "alarming" increase in the teen vaping trend.

Recent data has suggested that more and more teens are using e-cigarettes. But according to a new National Institutes of Health survey, the number of high school seniors who reported vaping within the last month almost doubled from 2017 to 2018.

Overall, it estimates that about 1.3 million additional kids used e-cigarettes in 2018 compared to 2017.

It's also unclear from the results if teens are aware that some of the vape products they're using are not nicotine-free. A quarter of the kids in the survey say they're only vaping "flavoring," but experts say that many vape options are not nicotine-free, and kids might not know that.

The study's authors say the data shows current federal health strategies aren't enough to stop teen vaping, even though the FDA has taken what it calls "historic" action on e-cigarette makers and limited flavored online e-cigarette sales to try to curb the trend.

The FDA has said it's prepared to take additional steps if the youth vaping rate doesn't decline after recent policy changes.

There are a few positive notes in the same study. Opioid and alcohol use has gone down, while marijuana use appeared to stay steady.