A Recap Of What Happened Between Russia, Ukraine 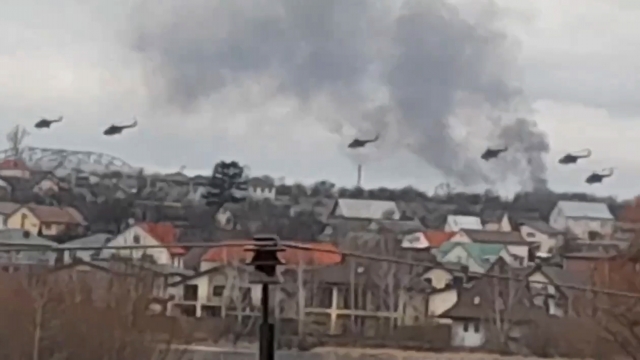 SMS
A Recap Of What Happened Between Russia, Ukraine
By Newsy Staff
By Newsy Staff
February 24, 2022
In the last 48 hours, Russia has attacked and invaded Ukraine. We're looking at the basics of what's going on.

Russia launched attacks on Ukraine early Thursday, in what Ukraine is describing as a "full-scale invasion." It's the largest attack by one state against another in Europe since Word War II.

Russia fired airstrikes across the country, leaving devastation and chaos on streets in many of Ukraine's largest cities. Ukrainians have been seeking shelter or looking to flee as Russia's invasion pushes forward.

Russian troops have entered Ukraine on three fronts, from the East, with its majority ethnic-Russian population, through Russian-occupied Crimea in the South, and through both its own border with Ukraine and through neighboring Belarus in the north.

In the first few hours of the invasion, Ukrainian officials reported dozens of military and civilian deaths.

There has been a quick and emphatic response from the U.S.

President Biden announced the U.S. would implement sweeping economic sanctions on Russia in response to the invasion.

"Putin is the aggressor," President Biden said. "Putin chose this war, and now, he and his country will bear the consequences."

Russia's invasion has already caused disruptions that Americans might soon see at home. Oil prices topped 105 dollars a barrel in trading Thursday, as the price hit its highest mark since 2014, and those price hikes may soon hit Americans at the pump, potentially worsening the jump in gas prices in recent months.

So, why is this happening? It goes back to Russia not taking the word of Ukraine and its allies on its face.

Russian President Vladimir Putin described the offensive as an operation meant to "demilitarize" Ukraine. It has railed against Ukraine and its allies in the U.S. and Europe with concerns that Ukraine would join the defense alliance called the North Atlantic Treaty Organization, or NATO.

NATO allies have repeatedly said that Ukraine is not currently ready to join the group, saying it needs to address issues of political corruption. And while Ukraine isn't joining NATO anytime soon, NATO has bolstered its troop presence in Eastern Europe with an eye toward protecting NATO member countries in the region.

Ukraine has not actively built up troops on the border with Russia. Ukrainian President Volodymyr Zelenskyy went on national television in Ukraine Wednesday night to urge peace in the region and said his efforts to connect with President Putin to reach peace were ignored.

Russia, meanwhile, had amassed over 100,000 troops surrounding Ukraine in the days leading up to the invasion. And Russian disinformation has played a key role in both justifying the invasion and now in the Russian effort to topple Ukraine's government.

Days before these attacks began, Russia recognized the independence of separatist movements in Donetsk and Luhansk, two regions in Eastern Ukraine with large ethnic Russian populations.

Russia used the declarations to accuse Ukraine of aggression. The country has released videos considered to be disinformation that purport to show Ukraine behaving aggressively.