A Recap Of The First Day Of Brett Kavanaugh's Confirmation Hearings 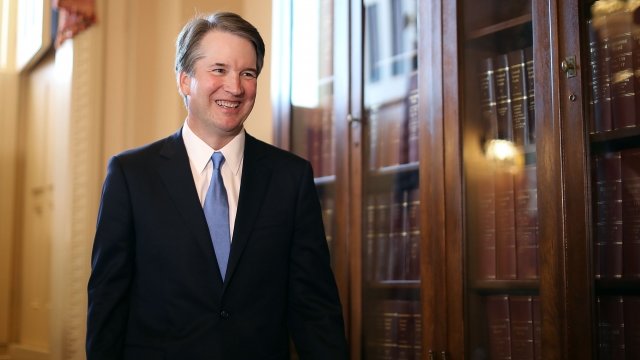 The first day of Supreme Court nominee Brett Kavanaugh's confirmation hearing is in the books. Here's what lawmakers had to say about him:

"There were many highly credentialed nominees like yourself that could have been sitting before us today, but to my colleagues, what concerns me, is that during this critical juncture in history, the president has handpicked a nominee to the court with the most expansive view of presidential power possible, a nominee who has actually written that the president on his own can declare laws unconstitutional," Sen. Amy Klobuchar said.

"And, sir, should those cases come before you, Judge Kavanaugh, I am concerned whether you would treat every American equally or instead show allegiance to the political party and the conservative agenda that has built and shaped your career. I am concerned your loyalty would be to the president who appointed you and not to the U.S. Constitution," Sen. Kamala Harris said.

"This is exactly where you need to be. This is exactly the time you need to be there, and I am telling President Trump: You do some things that drive me crazy; you do some great things. You have never done anything better in my view than to pick Gorsuch and Kavanaugh because you had an opportunity to put well-qualified conservatives on the court, men steeped in the rule of law who apply analysis, not politics, to their decision making," Sen. Lindsey Graham said.

"I am also a liberal Democrat and an unapologetic defender of a woman's right to choose. My hero is Justice Ruth Bader Ginsburg, for whom I had the great fortune of serving as a law clerk. I proudly voted for Hillary Clinton. I voted for President Obama twice. ... And yet I am here today to introduce Judge Kavanaugh and urge the Senate to confirm him as the next associate justice of the Supreme Court," attorney Lisa Blatt said.

And here's what Kavanaugh had to say about himself:

He also said: "The Supreme Court must never, never be viewed as a partisan institution. The justices on the Supreme Court do not sit on opposite sides of an aisle. They do not caucus in separate rooms. If confirmed to the court, I would be part of a Team of Nine, committed to deciding cases according to the Constitution and laws of the United States. I would always strive to be a team player on the Team of Nine."