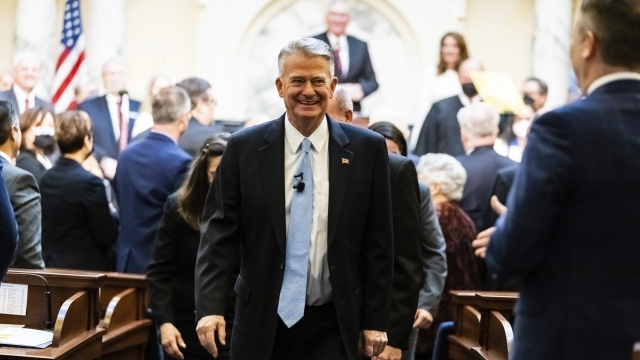 In Idaho this week, a historic test of the Republican party.

"It's really the match-up of the, maybe the more traditional moderate-conservative wing of the Republican party against a real radicalized hard right-wing element in the party," historian and columnist Marc. C Johnson said.

Idaho's incumbent Republican Governor, Brad Little, faces a primary challenge from the Lieutenant Governor Janice McGeachin, who says Little is not conservative enough. It's the first time in the state's history that a sitting governor has been challenged by his own lieutenant governor. The two have had very public feuds. During the pandemic, when the governor left the state, the lieutenant governor issued multiple executive orders, including one to overturn mask mandates. Little rescinded the orders each time.

"By any measure, Brad Little would be considered one of the most conservative Republican governors in the country. Actually, being challenged from the farther right has pulled him even farther right," Johnson said. "I think he signed, for example, recently arguably, the most restrictive abortion bill on the books right now anywhere in the country."

Trump endorsed McGeachin, who continues to push the conspiracy theory that the 2020 election was stolen. She has called the COVID-19 vaccine experimental, worked to get rid of Idaho's dependence on federal money and says if she wins, Christ will reign in the state of Idaho.

"The Republican party in Idaho is at war with itself between this more traditional sort of chamber of commerce country club wing of the party, and these really radicalized far right wingers heritage of the tea party movement in the in the freedom caucus in Congress," Johnson said.

The Republican party division sparked the formation of multiple groups attempting to pull the state GOP in different directions, setting up one of the most telling primary elections about the future of the GOP.

One is the Idaho Freedom Foundation, with a mission of turning Idaho into a "Laboratory of liberty by exposing, defeating, and replacing the state's socialist public policies."

"What I'm looking for in that election is just how much further to the right can the Republican party go in Idaho? And I think we're not — we haven't seen the end of the evolution of the party yet," Johnson said.

And whoever wins the Republican race, has pretty good odds in November.

A Republican has held the governor's office since 1995. In fact, it's been a Republican trifecta since then, with the GOP holding the governor's seat and a majority in both the state House and Senate for the last 28 years.