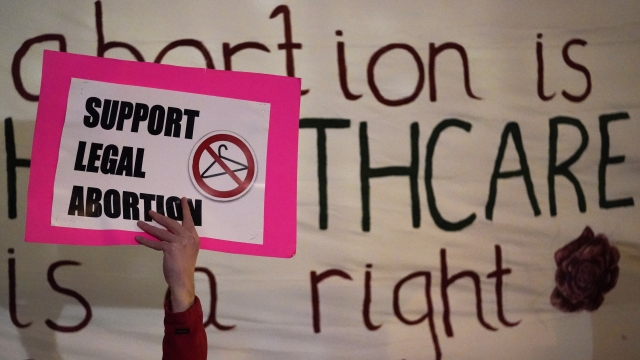 SMS
A Possible Post-Roe Idaho Is Redrawing Battle Lines
By Sam Eaton
By Sam Eaton
June 10, 2022
Idaho state politicians are likely to pass an abortion law if Roe is overturned, but both sides of the conversation are still pushing for their cause.

The Roe v. Wade Supreme Court leak has become what psychologists call a "flashbulb memory" — a moment in history so surprising and shocking that you remember exactly what you were doing and where you were when you heard the news.

In Idaho, where a trigger law would criminalize abortion 30 days after the Supreme Court overturns Roe v. Wade, that flashbulb moment is still raw.

"I took the evening to just cry and let out all my frustrations," Mistie Dellicarpini-Tolman said.

On the other side of town, Blaine Conzatti, who heads the Idaho Family Policy Center, had a very different reaction to the news of the Supreme Court leak.

"I was sitting in this room here," Conzatti said. "It was late at night, and I was incredibly excited because, you know, decades of hard work on the part of pro-lifers — all of that hard work finally paying off."

Conzatti authored the most recent abortion bill, which imposes civil as opposed to criminal penalties. He says it was intended as a backstop in case Idaho's trigger law — passed in 2020 — is challenged in state courts. But he says the big takeaway from the Supreme Court leak for him is that the decision to criminalize abortion will now be up to individual states, not the federal government.

"And that allows us to live in harmony with each other while having laws that reflect our values in the communities that we live in," Conzatti said.

The Guttmacher Institute, which supports abortion rights, projects 26 states are poised to ban abortion completely in the months after Roe v. Wade is overturned, dividing America in half on the issue.

But even in states like Idaho, support for banning abortion is far from universal. The most recent poll from 2019 showed 65% of Idaho voters believe it's important for women to have access to all reproductive health care options, including abortion.

An estimated 5,000 abortion rights supporters rallied in front of the state capitol in May after the Supreme Court leak.

Alexa Roitman was one of the speakers.

"Something I love about myself is that I have had the experience in the act of choosing to have an abortion," Roitman said.

Roitman says she's proud of making her private decision public if it helps the cause.

"It's just painted all the time that it's just a wretched experience, that everybody who leaves there is broken," Roitman said.

Roitman had an abortion when she was 23 years old and working as waitress. In the decade since, she's traveled, been an AmeriCorps volunteer and has become the first in her family to graduate from college.

"So there's life afterwards," Roitman said. "There is, and that life is just as important as the cells which are being removed."

Roitman is now engaged and considering a family or her own, but she questions whether she'll be able to remain in a state that directly threatens her reproductive health care.

"It's really troubling," Copple Masingill said. "I mean, living in Idaho, growing up in Idaho as a queer person, it's not lost on me that our state's politics don't align with my own. But as somebody with the privilege of owning a business and employing right now entirely a female team, I wanted to make sure that we did something that was aligned with our values."

After the Supreme Court leak, Copple Masingill announced on TikTok that her firm, Full Swing PR, would cover all travel expenses for her employees seeking out of state abortions.

"We're based in Idaho, the reddest of red states, and this is the right thing to do" Copple Masingill said. "It's aligned with our values as a company and as a women owned business, and it's just essential that we speak up."

The post, along with a follow-up, received more than 150,000 views, and Chobani and Starbucks have since announced similar policies. But Copple Masingill says there's only so much the Idaho business community can do.

But Idaho's state politicians are unlikely to budge on the issue. At a recent Republican unification rally, organizers said abortion wasn't on the agenda because it was an issue they were already unified on.

Blaine Conzatti says beyond the abortion ban he hopes to pass legislation that makes abortion the equivalent of murder, as well as additional bans on emergency contraceptives and IUDs. For him, he says the fight to end abortion is the same as the fight to end slavery.

"You know, in both cases, abortion and slavery, an entire class of citizens have been denied their constitutional rights, their natural rights that government is obligated to protect, and we would like to find a way to ensure that there's equal justice for preborn children," Conzatti said.

The irony of that analogy isn't lost on Dellicarpini-Tolman.

"People who hold marginalized identities have been dealing with this type of of dystopian reality their entire lives," Dellicarpini-Tolman said. "So now I feel like a majority of folks are being clued into what this feels like and what this looks like."

She says Planned Parenthood is doing everything it can to ensure women continue to get the reproductive care they need even if it means assisting them to get those services in other states, creating a kind of underground railroad for women's health.

Dellicarpini-Tolman says there's a groundswell of support for abortion in Idaho now that's it's threatened. She says the fight may have shifted from protecting those rights to reclaiming them but that it's a fight that's far from over.