Something Is Off About This Photo Of Tillerson's Visit To Afghanistan 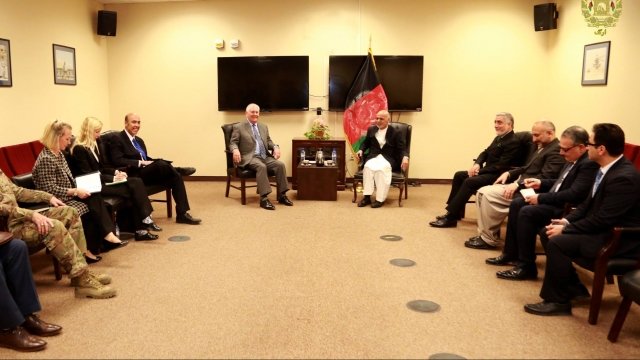 On Monday, U.S. Secretary of State Rex Tillerson met with Afghan President Ashraf Ghani. Where exactly they met depends on who you're asking.

On Monday, Ghani's office posted a photo of the meeting — but something in the photo was missing: a clock.

The New York Times notes that the clock above Tillerson and Ghani used Zulu time — a standard used by the U.S. military. It reportedly would have indicated the meeting took place at a U.S. base. 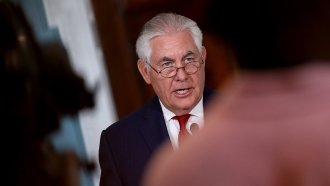 Rex Tillerson: 'I Have Never Considered Leaving This Post'

An expert told the Times, "There is no question that the photo has been manipulated." The question now is: Why bother?

Tillerson may have opted not to visit Kabul over security concerns. Just last month, Defense Secretary Jim Mattis was the target of a rocket attack in Kabul. The Times suggests the Afghan government didn't like the optics of having its president travel to a U.S. base to meet a diplomat.

Tillerson's visit to Afghanistan — and other countries in the region — was reportedly unannounced and conducted "under great secrecy." During his travels through the region, Tillerson discussed efforts to achieve peace with the Taliban.