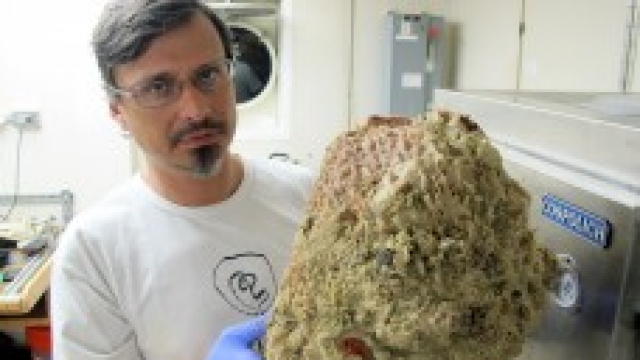 SMS
A Massive Coral Reef Discovered Near The Amazon Is Already In Danger
By Ryan Biek
By Ryan Biek
April 25, 2016
The 600-mile stretch of coral reef found at the mouth of the Amazon River defies what scientists previously knew about how coral forms.
SHOW TRANSCRIPT

A gigantic stretch of coral reef has just been discovered at the mouth of the Amazon River by an international team of scientists.

The 600-mile-long area of reef went unnoticed until now since coral usually survives best in clear waters. The Amazon's water, on the other hand, is some of the dirtiest in the world.

The location is even more surprising, since areas where fresh and salt water meet are usually where there are gaps in coral reefs.

This newly discovered stretch could change what scientists know about how reefs form.

But already the researchers say the reef and its wildlife are in danger. One said in a press release ocean acidification and warming are major threats.

And the Brazilian government already sold a significant part of the area for oil exploration and drilling.

As of now, this reef is pretty abundant with life –– with 60 different species of sponges and over 70 species of fish and crustaceans.

Time will tell if oil exploration is scaled back because of the find. Cases of the practice contaminating the Amazon River have been found in the past.

Brazil's state-run oil company has been plagued with scandal, but the country's economy also largely depends on the oil industry.

This video includes clips from CCTV, Moura Et Al. / Science Advances, The Economist, Discovery and National Geographic, and images from Getty Images, NASA, the University of Georgia and Lance Willis.