A Man's Finger Length Could Reveal If He's A Good Date 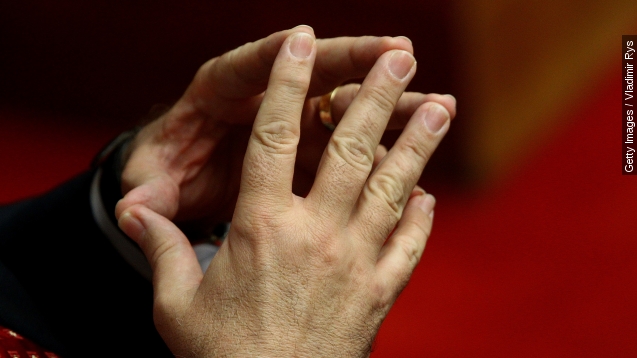 SMS
A Man's Finger Length Could Reveal If He's A Good Date
By Ryan Biek
By Ryan Biek
June 15, 2015
The ratio of a man's index finger to his ring finger can be a clue to how good of a date he'll be, according to a new study.
SHOW TRANSCRIPT

Forget his eyes. When looking for the perfect date, check out his hands. A new study says men with masculinized digit ratios show greater courtship-related consumption.

In simpler terms, a man's finger — not shoe size — apparently matters. If a man's index finger is shorter than his ring finger, he's more likely to spend money to impress a woman, such as buying flowers or paying for dinner.

Let's give every guy a second to check their fingers.

"They seem to be equal in size," ABC's Dan Harris said.

"There was a reason I didn't get married until 38," Harris said.

The study, published in the Journal of Consumer Psychology, actually found the opposite effect for women. Women with longer index fingers compared to their ring fingers were more likely to make a greater effort to attract potential boyfriends.

Besides being more likely to give romantic gifts, the study says, "women with feminized fingers are more likely to wear makeup, wear stylish clothes, use a special perfume ... and wear jewelry to attract potential boyfriends."

The difference in finger length is caused by the amount of testosterone and estrogen one receives in the womb. More testosterone means a shorter index finger compared to the ring finger, and more estrogen leads to the opposite.

According to the researchers, past studies have shown greater testosterone in men and greater estrogen in women prenatally leads to greater sex drives for both in adulthood. They're guessing this is the underlying cause for the use of romantic purchases. Yeah. All for sex.

Previous research also found men with shorter index fingers were more likely to have children. And a study from McGill University earlier this year found this same group of men had more harmonious relationships with women.

And to pour on the benefits, a study back in 2011 found men with shorter index fingers are perceived to have more attractive faces, again thanks to the increased testosterone. Some guys really do have all the luck.