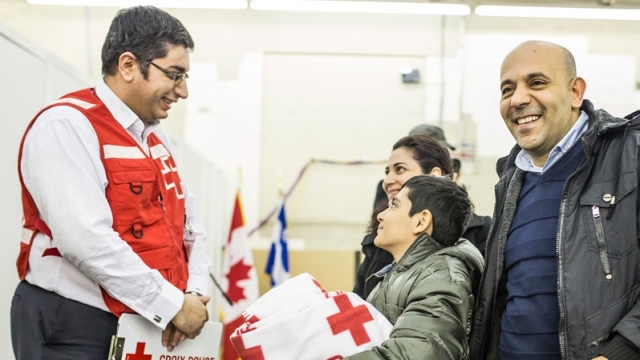 SMS
A Lot More Syrian Refugees Are Settling In Canada Than The US
By Katie Link
By Katie Link
March 1, 2016
Canada has welcomed more than 25,000 Syrian refugees into the country over the past few months. The U.S. has some catching up to do.
SHOW TRANSCRIPT

Canada announced it has officially surpassed its goal of resettling 25,000 refugees.

The government initiative, called #WelcomeRefugees, was announced back in late November. It came with a big budget and a small time table, but the country pulled it off.

As Jackie Northam said on NPR, Canadian citizens are partially to thank for the country’s success: "What’s remarkable is that about 10,000 are being resettled under a private sponsorship program. ... So we're seeing a lot of church groups and neighborhood groups, PTAs — things like that all across Canada are stepping up to help."

Here at home, things look a little different. Lawmakers across the U.S. are still working to block Syrian refugees from resettling in their states by denying the release of funding for programs that aid them.

Aid groups are fighting back, and on Monday a federal judge prevented Indiana’s governor from blocking funding for Syrians. Still, CNN reports more than half the nation’s governors stand firm in their opposition.

And the numbers reflect it. According to data from the U.S. Department of State, the U.S. has only accepted about 1,800 Syrian refugees since the civil war broke out in the country in 2011.

Last fall, President Obama said it was time to ramp up resettlement efforts. The U.S. has pledged to house 10,000 Syrian refugees by the end of this fiscal year.

But so far, we’re far off from that goal. Data from the Refugee Processing Center indicates only 950 Syrian refugees have arrived in the U.S. since last October.