A Look Back At Les Paul For His 100th Birthday 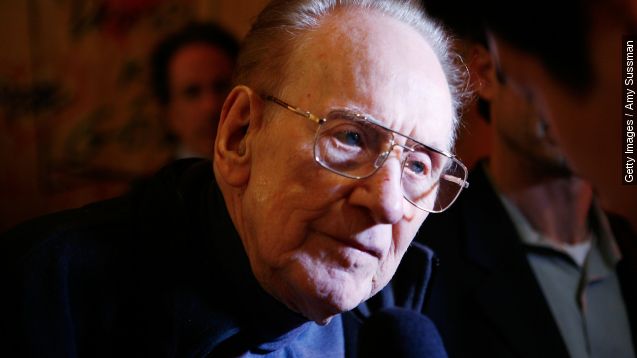 SMS
A Look Back At Les Paul For His 100th Birthday
By Jay Strubberg
By Jay Strubberg
June 8, 2015
Tuesday, June 9 would have been the 100th birthday of legendary musician Les Paul, a true pioneer in the recording industry.
SHOW TRANSCRIPT

He's regarded as one of the most influential and innovative musicians of all-time: Tuesday, June 9 would've been the 100th birthday of Les Paul.

The multi-faceted musician was a gifted jazz, country and blues guitarist and songwriter but it was his craftsmanship off the stage that propelled him to legendary status. (Video via The Biography Channel)

Les Paul was a pioneer of the solid-body guitar, or electric guitar, which, of course, produced one of the most identifiable sounds in music. Les Paul designed his model back in 1941. (Video via CBS)

"You really can't take a deep look at guitars without starting and looking at Les Paul. ... You wouldn't get that power, electricity, raw energy that you get out of an electric guitar if it wasn't for Les Paul," Todd Mesek, Vice President of Marketing and Communications at The Rock and Roll Hall of Fame, said.

Les Paul was also a pioneer for other innovations in the music industry outside of instruments. He was one of the earlier adopters of revolutionary producing techniques like tape delay, overdubbing and multi-track recording. (Video via YouTube / Les Paul)

Les Paul was inducted into the Rock and Roll Hall of Fame in 1988. And his contributions to music will be recognized once again later this week.

The Mahwah Museum in Mahwah, New Jersey, where he spent a good portion of his life, is celebrating Les Paul's 100th birthday with a special performances dedicated to the music legend. The event runs from June 12th to the 14th.