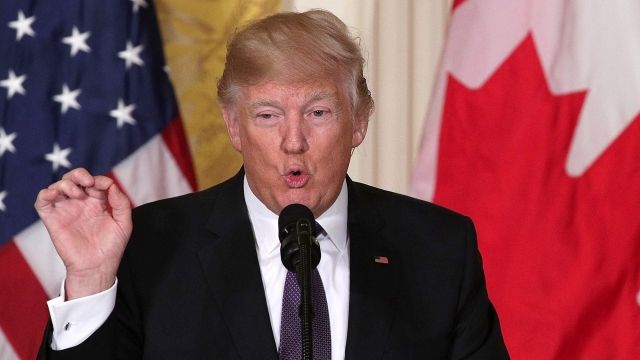 SMS
Trump Promised The Most Pro-Israel Presidency Ever. Can He Deliver?
By Eugene Daniels
By Eugene Daniels
February 14, 2017
The new president has backed off some of his campaign proclamations about our ally.
SHOW TRANSCRIPT

The U.S.-Israeli relationship has ebbed and flowed with almost every new administration. Some presidents are more active in the affairs of our ally, while some basically stick to giving aid.

But the cold relationship between former President Obama and Prime Minister Benjamin Netanyahu has created an ebb unlike any other. Is it going to be any better under President Donald Trump? It's not really clear yet.

"When I become president, the days of treating Israel like a second-class citizen will end on day one," Trump said at AIPAC.

Presidential candidates tend to make huge pronouncements on everything. And Israel was no different for Trump, who promised to be the "most pro-Israeli president ever."

And it seemed to start out that way. Trump promised, like some of his predecessors, to move the U.S. Embassy from Tel Aviv to Jerusalem and seemed to come down on the side of more settlements by Israel in occupied territory.

But like his predecessors — both George W. Bush and Bill Clinton — he's been dodgy about the embassy move and has taken a harder line on the settlements, saying they weren't "a good thing for peace."

"President Trump and I see eye to eye on the dangers emanating from the region but also on the opportunities," Netanyahu told reporters.

Netanyahu and Trump have known each other for years, so it's likely the personal relationship will be better than the last eight years.

But with Trump's tone on Israel now falling more in line with that of previous U.S. presidents, it's becoming clearer the old saying is true: Governing is a whole lot different than campaigning.