A Look At Unions' Roles In The 2016 Election 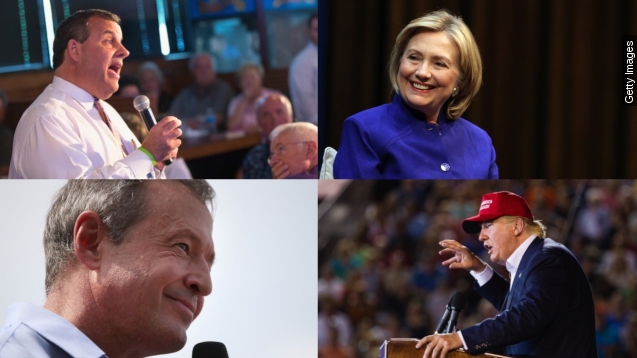 Presidential candidates are going after labor unions this election cycle, whether they're trying to garner their support ...

"We're going to get new laws to make sure your organizing and collective bargaining is respected again," Clinton said to the International Association of Machinists and Aerospace Workers union.

...or get rid of them altogether.

"On the national level, who deserves a punch in the face?," CNN's Jake Tapper asks.

That mainly depends on party affiliation.

For Democrats, a labor union endorsement means organizational support and even funding.

It's early, but Democratic front-runner Hillary Clinton has already been endorsed by two major unions: the International Association of Machinists and Aerospace Workers and the American Federation of Teachers.

Although those three unions jumped ahead in backing Democratic presidential candidates, at least two others are delaying their endorsements.

The president of the AFL-CIO, the largest labor organization in the U.S., said it's unlikely they'll back a candidate before the New Hampshire Primary in February.

And members within the SEIU, one of the nation's biggest labor unions and a main supporter of raising the minimum wage, are trying to delay a vote to endorse a candidate because of a rift between Clinton and Sanders supporters.

As for former Maryland Governor Martin O'Malley, he's appealed for the AFL-CIO's support, but also took his message to Trump International in Las Vegas.

"He's talking about labor unions along with several hotel workers who are attempting to unionize," a KTNV reporter said.

Interestingly enough, those workers are in a unionization fight with GOP presidential candidate Donald Trump — who obviously owns the hotel.

Many Republicans have voiced their opposition against unions for being ineffective or corrupt. Take New Jersey Gov. Chris Christie. He told CNN he's worked with teacher's unions, but they're more worried about benefits than educating children.

Wisconsin's Scott Walker is known in his home state as a "union-buster." Walker previously restricted the ability for public unions to bargain collectively through his 2011 budget, which led to a massive protest at Wisconsin's State Capitol.

There's still plenty of time before the 2016 election, but discussion around labor unions could continue to shape the rhetoric coming from presidential candidates this cycle.