It Might Be Their First Meeting, But Trump And Merkel Have A History 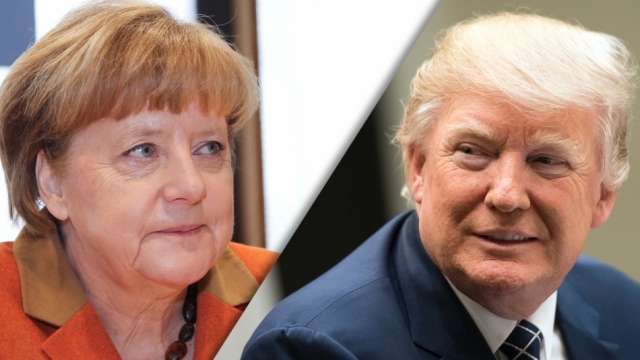 President Trump and German Chancellor Angela Merkel officially have a working relationship now. And though it's a young relationship, the two have quite a history.

"Hillary Clinton wants to be America's Angela Merkel. ... And you know what a disaster this massive immigration has been to Germany and the people of Germany," Trump told supporters during a campaign event in August 2016.

The two don't see eye to eye on many issues, including immigration and trade.

Under Merkel, Germany welcomed nearly 900,000 migrants in 2015. The number of asylum applications dropped by about two-thirds in 2016.

Trump tweeted in December 2015 that Merkel was "ruining" Germany.

However, Trump had previously complimented Merkel, even telling Time earlier in 2015 that Merkel was "probably the greatest leader in the world today."

Merkel wasn't a fan of Trump's travel ban. She said it "went against the core idea of international aid for refugees and international cooperation."

While Friday marks their first face-to-face meeting, Trump and Merkel shared what the White House described as an "extensive" phone call a week after Trump took office.

And they apparently reached some common ground, at least when it comes to the need for NATO members to pay their fair share.

Less than two weeks before the call, Trump had called NATO "obsolete." Merkel responded by saying, "I think that we Europeans have our destiny in our own hands."

And as Merkel told a German newspaper ahead of her trip, "It is always better to talk to each other than [about] one another."