A Look At The Firefighters Working To Contain The Getty Fire 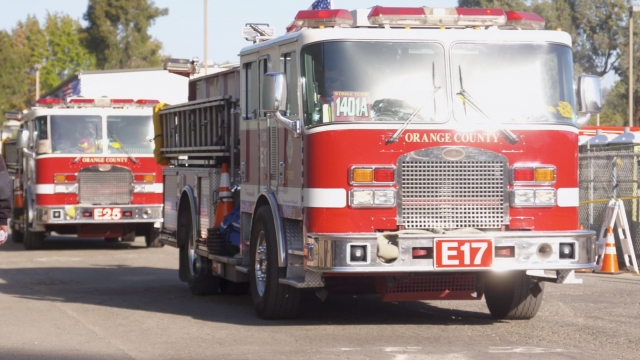 Newsy spoke to Paul Schori, one of the first firefighters to respond when the Getty Fire broke out in Los Angeles early Monday morning.

You may no longer be able to see the ash in the air in this Brentwood, California, neighborhood. But as you walk along the main street, your eyes still water, and it smells like someone's had a bonfire lit for hours.

But firefighters with the Los Angeles Fire Department are used to it. In order to contain the Getty Fire, they're working 12-hour shifts with no breaks.

"You need to protect these houses. ... But the easiest thing is that, you know, if it was your house, you'd want somebody giving it their most vigilant," Los Angeles firefighter Paul Schori told Newsy.

Los Angeles firefighter Paul Schori was one of the first personnel on the scene when the Getty Fire broke out early Monday morning.

"We did about 36 hours straight before we got our first break. ... You call your wife. I left a message around 4 in the morning: 'Today I'm out on the fire. I'm safe. I'll give you a call when I can.'"

And when that initial 36-hour shift was over, Schori and his fellow firefighters came back here to the LAFD's base camp at UCLA's Jackie Robinson Stadium.

The more than 750 fire personnel currently fighting the Getty Fire are stationed at this makeshift camp. When they're not out on the fire line or saving homes from potential destruction, they're here, eating their meals and catching up on some necessary sleep.

"If we were to have a flare-up, if we were to have it jump a canyon, it's not like a day job. So we're always ready. I mean, you can see that all the guys standing around — nobody's in shorts and T-shirts. They're ready to throw back on their covers and go."

Even though Schori's been fighting fires for 21 years, he says he still says he gets nervous when working on the fire line.

"Fires are dangerous. So if you're not anxious and scared, it is probably time to hang them up."

But to Schori, the risk is worth it.

"And the first anywhere from 24 to 36 hours are just, just grindstone."