Why Do Low-Polling Presidential Candidates Stay In The Race? 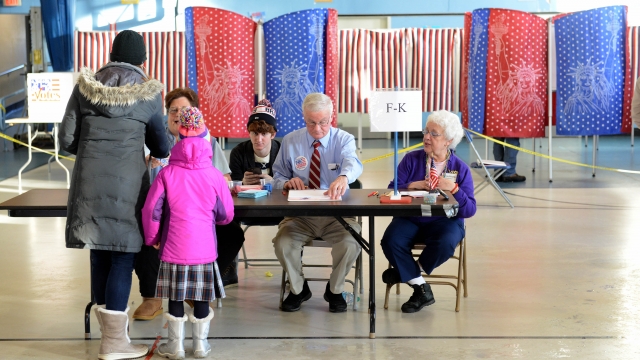 After three rounds of debates, there are still 20 candidates running for the Democratic Party's nomination for president. More than half of those people have a polling average at 2% or less, according to RealClearPolitics. So what keeps those campaigns going? Is there any precedent for a low-polling candidate to skyrocket and win? Spoiler alert: yes.

We'll start with the 1972 presidential race. Democrats needed a nominee to run against President Richard Nixon. More than a dozen people launched campaigns, and there wasn't a clear front-runner in the beginning. The ultimate Democratic nominee was George McGovern, but he'd started his campaign polling in the low single digits. In fact, Ted Kennedy, who wasn't even in the race, polled significantly higher. The New York Times reported at the time that McGovern's long-shot odds actually fueled his campaign. But in the general election, McGovern ended up losing to President Nixon in a landslide.

A similar thing happened in the Democratic primary four years later in 1976. The crowded field included more than a dozen candidates. Before the presidential primaries, Jimmy Carter was polling at less than 1%. But his campaign focused on competing in every state and winning the early primaries and caucuses — a strategy that was both was revolutionary at the time and successful. Carter clinched the nomination before the Democratic convention, and he went on to beat President Gerald Ford in the general election.

The 1992 election season gave Democrats another nominee who started polling in the single digits: Bill Clinton. As governor of Arkansas, Clinton wasn't a well-known politician. The person drawing the highest early poll numbers was New York Gov. Mario Cuomo, who never actually entered the race for president. Clinton lost the key early states of Iowa and New Hampshire, but Super Tuesday gave his campaign a big lift. He got enough support to secure the Democratic nomination before the convention, and he beat President George H.W. Bush in November.

Then, of course, there's the unlikely candidacy of President Donald Trump. When he entered the crowded Republican field, he was polling in the single digits. But he started to break away from the pack in July 2015, and then held on to his spot atop the polls for the remainder of the primary season.

History shows that Democratic primary contests can be a bit unpredictable, and it's not impossible for a long-shot candidate to win a major party's nomination. The real test starts when primary voting gets underway in February 2020.